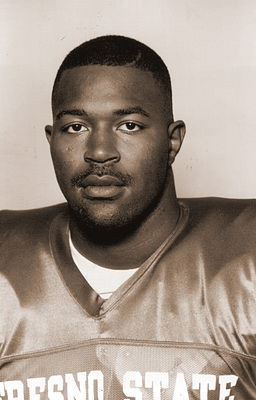 The 5-foot-9, 205-pound tailback captured the hearts of Fresno State football fans and teammates with a fearless bulldozing style that shattered school records and left bruises on defenders attempting to stop him.

In three seasons, Rivers rushed for a school record 3,473 yards and set another school mark with 4,388 all-purpose yards. As a senior, in 1993, he dominated the Western Athletic Conference with 1,477 rushing yards -- fourth in the nation -- and 14 touchdowns, powering Fresno State to an 8-4 record, a WAC championship and an Aloha Bowl appearance against Colorado.

The Bulldogs were 27-10 overall and won conference championships in each of Rivers' seasons. Among those victories: the 24-7 conquering of USC in the Freedom Bowl, a game in which he contributed a fourth-quarter TD. Such contributions inspired Bulldogs Coach Jim Sweeney to say, "Ron Rivers is without doubt the greatest back who ever played here -- there's nobody even close."

Undrafted out of Fresno State, Rivers carved out a seven-year career in the National Football League. Six of those seasons were with the Detroit Lions, for whom he returned kickoffs and was the backup for NFL Hall of Fame tailback Barry Sanders. Rivers rushed for 749 yards, averaging 4.3 a carry, had 28 receptions and averaged 19.9 yards on kickoff returns. He played in three playoff games for the Lions.

Rivers repeatedly came up huge for the Bulldogs when they faced big-name opponents. He shredded Brigham Young for 143 yards, ran for 155 yards and three TDs in a victory over Oregon State and had 218 rushing yards, with two TDs, in a wild 63-37 victory against a San Diego State team featuring Marshall Faulk.

The New Jersey born Rivers came to Fresno State out of San Gorgonio High School in San Bernardino, where he was named All-State by Cal-Hi Sports after rushing for 2,094 yards as a senior. In addition, he compiled a 50-2 record in wrestling.