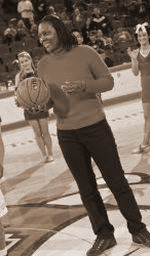 Among the best athletes in Fresno history, Roberts starred in track and field and basketball at Washington Union High School before rewriting the women's basketball record book at Fresno State and then playing at an MVP level in Europe's pro leagues.

Roberts was the 1985 state long jump champion, soaring 19 feet, 1 inch, and also set the Central Section triple-jump record with a mark of 38 feet, 10 3/4 inches. But she gained even more headlines on the basketball court.

After signing an early letter of intent to play for Fresno State in 1984, the 5-foot-11 forward/center averaged 22.5 points, 16 rebounds, 4.0 blocks and 3.5 steals a game to lead Washington Union to its first Sequoia Division title, a berth in the SoCal Regional finals and a 20-5 record. During her four-year prep career, she earned All-Fresno Bee honors three times and was The Bee's Player of the Year as a senior.

Blessed with amazing jumping ability and fiercely competitive, Roberts didn't skip a beat with the Bulldogs. Not only did she anchor Bob Spencer-coached teams that compiled a 77-41 record over her four seasons, but she set school records for points (1,778), rebounds (981) and made free throws (486).

She averaged 15.7 points and 8.7 rebounds a game during her collegiate career, shot 49% from the field, was named all-conference three times, and twice received All-America honors, (second team, fourth team). In 1989, she was named the Fresno State women's athlete of the year.

Roberts was a standout on three straight national championship teams while playing in the Netherlands from 1993-95. She also played in Sweden, Germany and Belgium during a pro career that ended in 2002. During that time she earned three championship tournament or season MVP awards.

In 2011, Roberts was recognized by Fresno State for her contributions to the community, as well as her sterling athletic career, as a Top Dog honoree.