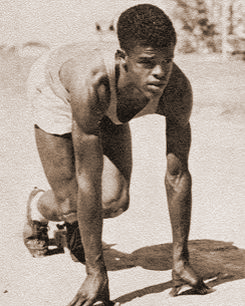 Ancel Robinson set the Fresno State high hurdles record of 13.6 seconds in I958 and it wasn't broken until 1994. The CIF state champion in the highs and lows in his senior season at Selma High School didn't confine all his time to track and field. In the early 1970s, Robinson also was the national speed and dance champion in roller skating. Robinson was 5'11" whichwas short for high hurdlers, but just right for the 220-yard lows where he tied the world record of 22.2 seconds in the 1957 NCAA championships.

Robinson was different from some high hurdlers because he had 9.5 second, 100-yard speed. Robinson was born and raised in Selma and was an excellent athlete in high school. He played football and track, but hurdles were his favorite. Hugh Adams, another Selma product and a hurdler himself, was a few years ahead of Robinson in school, but recalls watching Robinson at practice. "Ancel would put Pepsi caps or coins on top of the hurdles, so he could learn to just skim them," Adams recalled. "He had good form and didn't have trouble adjusting to the collegiate hurdles. The low hurdles were made for him." Robinson was recruited by Fresno State coach J. Flint Hanner and began his collegiate career in 1952. He will never forget his first Fresno State meet. It was against Stanford University and the Tulare wonder boy. Bob Mathias. "I admit I did have some stomach butterflies before the meet, but they disappeared when the starter's gun cracked," Robinson said. "The higher hurdles didn't bother me, but Bob was a lot taller and stronger." Mathias edged Robinson in the highs in 14.5, but Ancel returned the favor in the lows in 23.7.

Robinson was called into military service after his freshman season and spent two years in Japan, Korea, and Iwo Jima. He put on fifteen pounds and gained an inch. Hanner and his assistant Dutch Warmerdam were anxious to see how he would do after returning from the Army. It only took one meet for them to find out that he hadn't lost either his speed or intensity. Robinson participated in the Central California AAU meet in Kingsburg. Running in competition for the first time in two years and with only four days of training, the muscular Robinson did the highs in 14.5 and the lows in 23.7. "It was a remarkable performance" Warmerdam stated. "I have no doubt that Ancel will be one of the best in the nation this year and has a good chance to make the Olympics." The Olympics was one goal that eluded Robinson, but after tying the world record in the lows in 1958, he took an AAU international tour through Germany, Amsterdam, and Finland. He then joined the main tour sponsored by a Philadelphia newspaper for meets in Russia, Poland, Hungary, and Greece. Robinson won the highs in the first-ever Russian-U.S. meet in Moscow. On this trip, he ran 13.6, 13.7, and 13.8. Robinson was always a favorite athlete at Fresno State. He was in the first group selected for the Fresno State Track Hall of Fame. With his son, Robinson has his own television repair shop in Fresno. Ancel Sr. likes motorcycles and enjoys the speed and open air. He has driven his motorcycle all over the country.