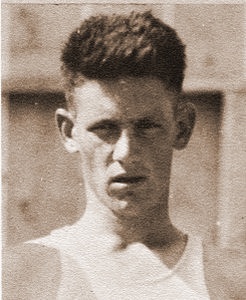 It would take a historian to recall the accomplishments of Elroy Robinson. The shy, 5'10", 165-pound middle distance runner couldn't make his Fresno High School team, yet set three world records. Robinson was a hard-working honors biology student at Fresno State College. He began a teaching career at Merced Elementary School in 1937 and coached the Wheaton College track and field team for a time. He came back to Fresno as a science teacher at Ernie Pyle Junior High School and then finished his vocational career as a biology teacher at Fresno City College. Robinson would never have been recruited today because the only race that he won at Fresno High was the intra-mural two-mile.

Bulldog coach J. Flint Hanner allowed him to come out for the Fresno State team, but Robinson did little his freshman year to show that he was a prospect. The turning point came during the 1934 West Coast Relays when Robinson took the baton for the anchor lap against San Jose State in the two-mile relay nearly half a lap behind the leaders, but clocked 1:54.7 to win the race and convince Hanner he could be something special. In 1935, he won both the NCAA and AAU half miles. Robinson stated during a 1959 interview that he always thought the mile would have been his best distance because he didn't have a finishing sprint. "My fastest quarter mile was only 48.8. I had to build up a big early lead, so I could fight off the runners who did have a sprint finish." Robinson said. "I ran only one competitive mile and was clocked in 4:16, but with a tough half mile coming up. I didn't go all out. My coaches were convinced I was a half miler and that was it." Robinson appeared to be a lock to make the U.S. Olympic team where he would have been a favorite to medal. That was before a 1,000-yard match race against Glenn Cunningham. The race was close until the final 125 yards when Robinson's ankle broke under the stress of the strain on his muscles and tendons. The ankle knitted together so well that Robinson began working out by himself on a third of a mile Merced track. He joined the Olympic Club and had his greatest season.

On May 13, 1937, he defeated teammate Norman Bright in a special 1,000-yard race in the Fresno West Coast Relays and recorded a world record time of 2:09.7. Two months later, In the National AAU meet at Randall's Island, New York, he ran perhaps the finest race of his career to establish world records of 1:49.6 for the 800-meters and 880-yards. "Actually my 800-meters time was a little better than that," Robinson told me, "But they didn't have separate timers, so they just took my 880 time which also bettered the 800-meters mark at that time."

Robinson retired from competition in 1938 and accepted a coaching job at Wheaton College in Illinois. Bob Winter, who taught biology with Robinson at Fresno City College for twenty-five years said the most fun that he ever had was with Elroy in field biology classes or just time with the two of them. "He was an outstanding teacher and such a good-hearted person. He really cared about his students. The kids loved him and I don't think he had a mean bone in his body," Winter said. "Even after he retired and had Parkinson's Disease, his mind was still sharp. "He loved to climb mountains in Europe and here. We taught Boy Scouts together for several summers at Camp Chawanakee at Shaver Lake to help scouts get their merit badges. He was a true biologist and lived his Christian faith every day. I sure miss him."