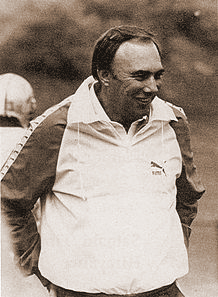 Darrly Rogers: Born and reared in Long Beach, Jordan High School and later at Long Beach City College. He was a wide receiver and defensive back at Fresno State. He was signed as a free agent and played one year as a defensive back for the Los Angeles Rams in 1959. Rogers served as an assistant coach at Fresno City College for four years before accepting the head job at Hayward State College. After one year he returned to Fresno State as head coach and remained in that capacity until 1972. The Bulldogs won the conference title in 1968. He moved to San Jose State in 1973, winning the conference championship in 1975. The followed four seasons at Michigan State where he was named College Coach of the Year by the Sporting News in 1978 when the Spartans went 8-3. He had four winning seasons (1980-84) at Arizona State University and then was hired by the Detroit Lions where he coached three-plus seasons. As a college coach his teams were noted for their high scoring passing attacks.