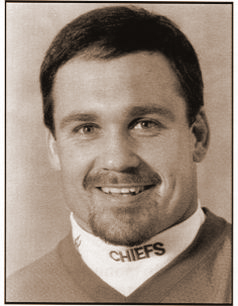 With success as both a linebacker and fullback at Taft Union High School Tracy Rogers had to decide which side of the line of scrimmage to pursue after high school. He chose defense, a decision that would clear a path for a seven-year career with the Kansas City Chiefs. "My game plan was to put big hits on the offensive players and that way they don't want to come around to your side next time," Rogers said. After graduating from Taft Union, the 6'2", 230-pounder excelled for two years as a linebacker at Taft College, harassing junior college ball carriers and pass receivers. He did even more damage on special teams.

His Taft career brought him team MVP awards and All-Northern California and Honorable Mention All-American honors. His performance also attracted college recruiters, and he headed to Fresno State. In his two years at Fresno State in 1987 and 1988, Rogers made 149 tackles, thirteen sacks and forced three fumbles. In his junior year, the Bulldogs went 6-5 and came back in 1988 to finish 10-2 and win the Big West Conference and beat Western Michigan, 35-30, in the California Bowl. Tracy was a two-time All-Big West Conference linebacker and also a two-time AP Honorable Mention All-American. He also starred in the East-West Shrine Game, with eight tackles and an interception.

When Rogers was inducted into the Fresno Athletic Hall of Fame in 2004, he gave credit to his Fresno State coaches. He noted head coach Jim Sweeney s "great passion" and ability to motivate his players. Rogers stated, "And Wily Robinson, my position coach, was a great teacher of the game and that helped me. I am so honored to be a member of the Bulldogs' family." The Houston Oilers chose Rogers 7th in the 1989 NFL draft. He spent a year on the Oilers developmental squad, and then played seven years with the Kansas City Chiefs.

He had duties on special teams for the Chiefs,but also started at linebacker for twenty games. He battled injuries for three years, but came back and played in forty-four more games for Kansas City. He was a leader on the team in 1993, with 94 tackles, including six games where he had ten or more tackles. In a 1994 game against the Denver Broncos, Rogers had fifteen tackles, including three on a famous goal line stand in which the Broncos failed to get into the end zone from the one-yard line in four tries. In 1995, Rogers also led the Chiefs with twenty-three special teams tackles. "There are always special moments in the games, but mainly. you remember the coaches and the players you played with. I think you should set your goals high and work to get them, and hopefully it will work out for you, no matter how big or how small you are. The big guys feel the pain just like the little guys," Rogers said.

Knee injuries forced Rogers to retire in 1997. He was grateful for the experience of playing professional football with the likes of Joe Montana, Marcus Allen and Derrick Thomas, stating, "Playing in the NFL is every young player's dream and I was fortunate enough to live that dream and play with some of the greatest athletes in the world. Tracy lived in Bakersfield with his family, focused on a career in business. His wife, Suzanne said, "Things that made him a successful athlete have also made him successful in business and family."