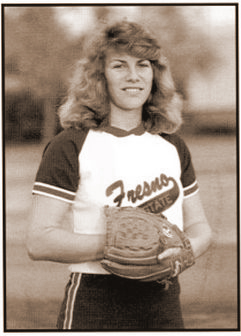 When Lori Romeiro-Gardner was at Lemoore High school, she set the standard for what It took to be a successful student athlete. In softball, she was the ace of the Tiger pitching staff and led her teams to many championships. Not only could she hit and field, but she established many pitching records at her school as well. Lori was loved and respected by her coaches and teammates and earned many honors in leagues and tournaments. The right-handed pitcher was also recognized for her scholastic and leadership skills.

Lori's well-rounded abilities led to a scholarship opportunity at California State University, Fresno. Without missing a beat, she kept right on breaking individual records while helping her Bulldog teammates post many victories. In 1984, as a sophomore, Lori pitched successive no-hitters and threw twenty-one consecutive hitless innings-both these feats set new records at Fresno State-as she guided the team to the College World Series where the Bulldogs finished 5th in the NCAA Division I "Big Dance." Lori continued to shine at Fresno State in 1985, receiving the Bulldog MVP award, but in 1986, a knee injury caused her to miss the entire season. This was tough for her, her teammates and Coach Margie Wright to handle, but she found other ways to contribute to the squad that year. In 1987, she was back!

Lori set more marks during the 1987 campaign, pitched sixty straight shutout innings and earned All-American honors. She posted a 25-6 win-loss record on the season. Her time at Fresno State was great for both the athlete and the university. Lori's overall record at the school was 69-25, as she completed eighty-one of her ninety-five starts and allowed just fifty-six earned runs in her entire career. She struck out 5.3 hitters for every seven innings pitched, and had a career earned run average of 0.55 while throwing forty-three shutouts. Lori was an all-around a player who led the Bulldogs with her competitive spirit. Coach Margie Wright credits Lori for being a big part of the Bulldog's success. "She was just a great team player who really understood the game and competition," said the Bulldog skipper. "It truly was an honor and pleasure to coach Her."It was also at Fresno State where Lori first met her future husband, Mark Gardner, a star pitcher for the Bulldog baseball team, who went on to fame as a major-league pitcher and then as a pitching coach with the San Francisco Giants. Mark is also an inductee in the Fresno Athletic Hall of Fame, Class of 2003. At the end of her Fresno State career, Lori had put herself permanently in the school's record book, making the Top Ten List in every pitching category. She became a member of the United States Softball Team which toured Cuba in 1994.

Tragically, Lori was diagnosed with liver cancer in 1997 and underwent a transplant a year later, requiring a second procedure sixteen months later. Deeply committed to raising the awareness for the need of organ and tissue donations following her two transplants, Lori and Mark became actively involved with the California Transplant Donor Network and Stanford Medical Center. As a result of their ongoing organ transplant and tissue donor program support, Lori and Mark created the Step to the Plate Foundation to assist families of transplant recipients with the full support of the San Francisco Giants organization. Each year, an Organ-Awareness Day is sponsored by the Giants, featuring the distribution of specially-designed organ donor cards, some of which are signed by the players for those fans who decide to become donors. The mother of two sons, Nicholas and Daniel, Lori Romero-Gardner was thirty-nine when she died in 2003. Through the efforts and generosity of the Gardners' foundation, Lemoore High School was able to dedicate the Lori Romeiro-Gardner Softball Field in her honorin 2004.