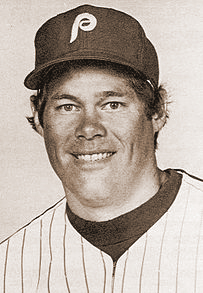 Of the thirty-two All-Americans who played baseball for Bob Bennett at Fresno State, right-handed pitcher Dick Ruthven is exceptional in that not only did he make it to the major leagues, but was also a member of a World Series championship team. Ruthven was on the roster for the 1980 National League pennant-winning Philadelphia Phillies, who ended a drought of thirty years by making it into the World Series and then defeating the Kansas City Royals in four of six games. Ruthven's resume includes credit for one of the complete game Series wins. Although he was a shortstop when he played for Irvington High School in Fremont, Bennett detected an exceptional amount of power and accuracy in Ruthven's athleticism and converted him to a pitcher for the Bulldogs. The experiment worked to perfection.

Ruthven played three seasons for the Bulldogs before turning professional after his junior year. During that three-year span, he won 28 of 37 games. He was 5-2 as a freshman, 13-4 as a sophomore, and 10-3 as a junior. At 6'3" and weighing 190 pounds, there was plenty of heat in Ruthven's pitches as he perfected a style that produced forty-eight strikeouts as a frosh, 171 as a soph and 153 as a junior, totaling a school record of 372. Ruthven, as a soph, led the 'Dogs to a co-championship of the Pacific Coast Athletic Association and tied a school record by striking out twenty batters in one of his junior season games to nail down PCAA Player of the Year and All-American honors before turning pro after the 1972 season.The Phillies paid Dick Ruthven a bonus as a #1 draft pick to sign with them in 1972. His big league career extended for fourteen years spread among the Phillies, the Bobby Cox-coached Atlanta Braves, and the Chicago Cubs.

He was 2-6 when he was traded back to the Phillies and was 13-8 for the remainder of the year, tallying a combined 15-11 Braves/Phillies record. Ruthven was 7-5 and 4.27 in 1979, a career best 17-10 in 1980, and 12-7 and 5.15 in 1981, making the All-Star team for the second time. He was 11-11 and 3.79 in 1982. In 1983, Ruthven was traded by the Phillies to the Cubs, racking up 12-9 and 4.10 numbers the rest of the season. Injuries figured importantly in Ruthven's departure from major league baseball, but more significantly, he explained that he retired so that he could spend more quality time with his family “I might have hung on a couple of more years," he said as he returned to Atlanta, "But my kids were entering school. I just felt it was more important for them to have their father around.” Kuthven was thirty-six when he exited baseball. His son, Sean played for the University of Georgia Bulldogs and his dad was a regular fan in the bleachers during most of the home games. Was it tough on him being a fan? Yes." he replied. "The anxiety I felt watching Sean pitch was greater than anything I ever experienced as a player."