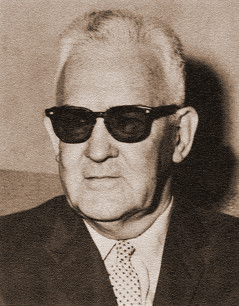 This 1919 Fresno High School graduate became the first sports writer and author to be inducted into the Fresno Athletic Hall of Fame. Samuelson rightfully earned the title "Mr. Rose Bowl" after covering the game for three decades. His book The Rose Bowl Game recounted the first fifty years of the New Year's Day classic and today is considered as the most authoritative book on the history of what is called " The Granddaddy of Bowl Games." Samuelson spent fifteen years doing research before writing the book about a tradition which began in 1902. After Fielding "Hurry Up" Yost's point-a-minute Michigan Wolverines chewed up Stanford 49-0 (touchdowns in those days were only five points), Michigan gained 1,463 yards in 142 plays. Yost used just eleven players with the immortal Willie Heston as a decoy. Fullback Neil Snow scored five touchdowns.

Even though the initial game was a financial success, the rout was considered extremely boring. For the next thirteen years, football took a back seat to chariot races during the Tournament of Roses Festival. It wasn't until 1916 that the second Tournament of Roses football classic was played. The game was dubbed the Rose Bowl in 1923 when the stadium seated 52,000 and was horseshoe-shaped. The contest survived two World Wars, a depression, the outbreak of several diseases, and wars in Vietnam and Korea. It was the first bowl game and has been imitated, but not matched, by more than 100 others worldwide. Samuelson was a longtime sports editor for the Pasadena Independent Star-News. During his journalistic career, he was president of the Football Writers Association of America, a member of the president's Physical Fitness Committee, and a member of the Helm's Foundation in Los Angeles. His stories and columns were carried in newspapers from coast to coast. Rube was born in Minneapolis on December 2, 1901, but the family moved to Fresno County when he was still very young. He attended schools in Selma and Fresno before graduating from Fresno High. He became a close friend to John Voenes, who was the first president of the Fresno Athletic Hall of Fame and a co-founder of the Hall. At Voenes' invitation, Samuelson emceed the first nine Fresno Athletic Hall of Fame dinners. In 1961, he lost his eyesight due to a mysterious illness but continued to write his daily column and to attend the Hall of Fame dinners.