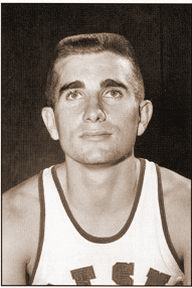 Born and raised in Fresno, George Sarantos has stated that Dickey Playground was his second home. He spent every spare hour of his childhood at Dickey and learned to play everything from basketball to ping pong. What he didn't learn there were volleyball and tennis-the two sports in which he would gain national and world recognition. Sarantos, 5'6" and 125-130 pounds, didn't play basketball in high school until his senior year. He helped the Fresno High School Warriors, coached by Lee Angelich, to win the Yosemite League title and made the All-City team. He was a quarterback on the Class B team, just not big enough for the varsity. Fresno City College was his next stop where he played basketball for Coach Joe Kelly for two seasons. He also was ranked number one in singles on the Rams' tennis team. "Coach Kelly was an amazing man," Sarantos said, "He really, really knew basketball. We didn't have near the talent of Coalinga or Allen Hancock, but we still were able to compete. Joe really understood the game and his system worked."

Sarantos went from Fresno City to Fresno State. He played one season for Bill Vandenburgh and two for Harry Miller. "Harry was another guy who really understood and could teach basketball," Sarantos recalled, "His practices were physically tougher than our games. I was team captain for Harry and we won the conference my last year." Sarantos tried coaching for four seasons at Edison High School, winning a league championship in 1967.

The summer after he graduated from high school, Sarantos and all-round Fresno High Warrior athlete Richard Gunner began playing volleyball. Sarantos and Gunner spent a summer school semester at UC Santa Barbara, so they could play beach volleyball. They won several two-man tournaments. Sarantos broke into big-time volleyball in 1967 when he was the coach and setter on the National Championship men's team powered by John Alstrom of Fresno and his BYU teammate, John Stanley. The following year, the three players went to Hawaii to play for the Outrigger Canoe team coached by a man who would later become the assistant Olympic coach. Alstrom and Stanley made the U.S. Olympic team and Sarantos was an alternate.

George started the 500 Club on the corner of Maroa and Shields avenues and later opened Club One on Van Ness Avenue. "The club took all my time, so I played a year of volleyball To the San Francisco Olympic Club and dropped out of sports until 1985 when Leonard DeFendis talked me into playing tennis again." He stated Fig Garden Club tennis pro Coby Roberts really helped him with his tennis strokes and convinced him he could be pretty good. Sarantos never won an age group (60-65) national singles title, but took a dozen national doubles titles with several partners. When he teamed with Hank Leichtfried in 2004 and 2005, they were almost unbeatable; winning five of the six national tournaments and taking one world title. In 2001, Sarantos teamed with John Gorsky to capture the USTA 60 and Over National Clay Courts title and the following year, Sarantos partnered with Jerry Edgar for the indoor doubles title and with Suella Steele for the mixed doubles championship. Grass is the favorite playing surface for Sarantos and he had plans to play in the 2009 World Tournament in Perth, Australia; his first year in the seventy and over age class. Sarantos admitted keeping in shape was getting tougher each year. Despite a bad back, when his matches get going, the excitement of the game overcomes the pain even if he feels it strongly the next day. Harry Miller said during a team reunion, "inch for inch, George was as good as they come."