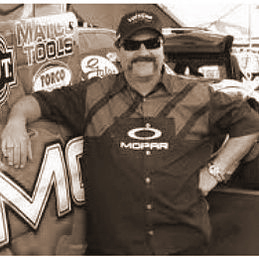 Sclezi got his first taste of drag racing on sand tracks as a teenager, later tasted success in the Sportsman classes and blossomed into one of the most dominant drivers in National Hot Rod Association history.

The Fresno native’s name is all over the NHRA record book. Lightning quick off the line and fearless behind the wheel, he was the first driver in association history to break the 325-mph (1998) and 330-mph (2004) barriers.

Separating Sclezi from the competition: he was fast and consistent in both of drag racing’s premier divisions, becoming just the second driver to win Top Fuel (1997, 1998, 2000) and Funny Car (2005) season titles. Reflecting his grass-roots beginnings, he is the only NHRA competitor to have won races in Top Fuel, Funny Car, Alcohol Dragster, and Alcohol Funny Car.

Following the racing death of Blaine Johnson in 1996, Scelzi was chosen to drive Alan Johnson’s Top Fuel car. Scelzi justified the selection by becoming the first rookie to win an NHRA title. He honored Blaine Johnson by keeping a picture of him in his dragster.

After conquering Top Fuel, Scelzi took aim at John Force’s dynasty in Funny Car. The 2005 season produced one of the closest-ever NHRA points finishes, with Scelzi edging Ron Capps and Force for the title.

A handful of drivers have been successful over a longer period, but Scelzi may have shone brighter than any during his 12 seasons at the elite level. He won 25 of 39 finals in Top Fuel and 12 of 20 Funny Car finals. You didn’t want to face him with the event on the line.

Scelzi also helped carry drag racing to new heights of popularity with his fiery, tell-it-like-it-is personality and rapport with fans. Retiring after the 2008 season, he continued to advocate for improved safety in a dangerous sport.