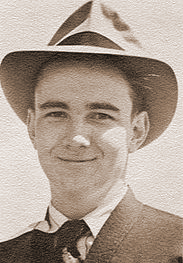 They sent a boy to do a man's job and they got a surprise. Lloyd A. Sciaroni was only a freshman at Fresno High School when he tied the 410 shotshell world record in 1938 at the Western Open Skeet shoot. From 1935 to 1940, Sciaroni competed against the best in California. There was no "junior class," so the young Fresnan was forced to compete against adults. It made little difference because he won a number of state championships in the twelve and twenty-gauge competitions. During 1939 to 1940, SCiaroni was a member of the championship Five-Man National Team. He solidified his ranking by being named to the official All-American team as well as the Sports Afield All-American team. Sciaroni enrolled at Stanford University in 1942 and was captain of the Indian Rifle and Pistol team. With World War lI in full flame, Sciaroni joined the U.S. Air Force where he established a .45 colt automatic course record at the Santa Ana Pre-Flight School and qualified as an expert marksman in all Air Force weapons. During his time as a range officer in Guam, he received a commendation for forming and maintaining a gunnery training program for the 331 Very Heavy Bombardment Group. In 1946, he was a member of the championship All-Pacific Air Force Five-Man team. He later became a recognized medical doctor in Fresno.