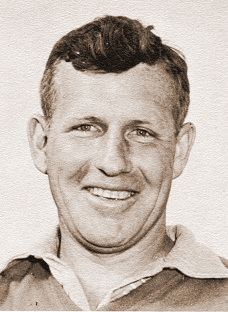 Charles Seaver was the finest amateur golfer to ever call Fresno home. He was a good friend, a gentleman, and a links legend in California. For years, Seaver was a Northern California Golf Association official before becoming president of that group in 1980. He was a Walker Cup golfer at Stanford University and a winner of every California amateur tournament of note. Seaver was a six-time Fresno City Golf Tournament Champion and a 1964 Pro-Am champion with Mike Fetchik during his record thirty-nine wins of the Bing Crosby/AT&T Golf Tournaments at Pebble Beach. There is a Seaver Golf Academy at Poppy Hills Golf Club and a NCGA North versus NCGA South tournament called The Seaver Cup played every two years. Yet for all of his golf successes, Seaver, who died in 2002 at ninety-three, is best recognized by the younger generation as the father of Hall of Fame pitcher Tom Seaver.

The elder Seaver was born in Kansas City, Missouri, but his father, Everett, moved the family to California in 1922. Everett, a fine golfer in his own right, taught his son to play the game. "My father didn't let me touch any club, but a wedge or putter for a year," Seaver admitted. "That was smart advice because when I became proficient with those clubs, the others came easier. Good use of the wedge and putter enable you to shoot low scores."

At Stanford University, Seaver's teammate was Lawson Little and they played on the United States Walker Cup team in 1932. Seaver did his part in the U.S. 8-1 victory at The Country Club in Brookline, Massachusetts, winning one single and one foursome match. Seaver was a charter member of the Stanford Athletics Hall of Fame. Little went on to win the U.S. and British Amateur titles in 1934 and 1935 and the U.S. Open in 1931. Seaver and Little played each other in the finals of the inaugural Stanford University Championship in 1931 and Little won on the 36th hole. The following year, Seaver won on the 37h hole. Seaver had qualified for his first U.S. Amateur in 1929 and made the tournament again in 1930, 1931, and 1932. In 1931, he came close to making the finals, but was defeated one-up by Gene Homans in the semis. If he had won that match, he would have faced the great Bobby Jones, who that year won the "Grand Slam" consisting of the U.S. and British Amateurs as well as the U.S. and British Opens. Seaver said he played with Jones three times, but not the most important time.

Charlie is one of two players to hold the California Amateur, North California Golf Association Amateur, and the Southern California Golf Association titles at the same time. He won the California state crown in 1932 and 1933 and repeated as NCGA champion. In 1934, he again captured the SCGA. Seaver and Betty Cline were married April 6, 1935 and naturally, they spent their honeymoon at Pebble Beach. Their first child, Katie, was born in Los Angeles in 1936 and, one year later, she was joined by son, Charles H. Seaver, Jr. At the time, Charlie was working in the Bakersfield oil fields.

In 1939, he made it to Fresno, working on the Friant Dam for Griffith and Bent. Carol was born in 1941 when the Friant job ended. It was in 1944 that Seaver began his thirty-two years with Bonner Packing in Fresno and, the same year, George Thomas Seaver was born. Charlie got to know Bing Crosby when his father would take him to the Ambassador Hotel in Los Angeles in the late 1920s, when Crosby was singing with a group called the Three Rhythm Boys. Through golf, Crosby and Seaver became friends, although they never actually played together. When the famous "Groaner" started his first Pro-Am at Rancho Santa Fe, Seaver was invited to join. Due to Seaver's overbooked schedule, he was unable to play his first Crosby until 1947, the year that the event was moved to Monterey. From then on, he never missed, playing his thirty-ninth event in 1986. Three times, he played with his son, Tom. When Seaver and Fetchik won the Pro-Am, they opened with a fifty-eight. Fetchik had a seventy, so Seaver helped twelve strokes. They finished thirty-under for four rounds after a typical Crosby rain storm on the final day. PGA professionals who drew Seaver in the Crosby Pro-Am segment of the tournament always benefited from his knowledge of the courses and the many holes that he won to support their team. The downside was when his hip problems became so bad in his latter years that it greatly diminished how far he could hit the ball. Also, his difficulty in walking the long courses, though his own handicap was still low, was an obstacle for his pro partner. When he finally agreed to a hip operation, he was able to begin playing regularly again. Seaver won the Fresno City Amateur six times when it was match play and also became a member of the Sunnyside Country Club where he and his family spent many happy years.

When Seaver became president of the NCGA in 1980, he was able to realize the dream of building the members' course at Poppy Hills. He had help from many capable people, but it was his dream. It opened for play in 1986. One of Charlie's treasured moments was in 1992 when he traveled to Cooperstown to see Tom inducted into the Baseball Hall of Fame. Charlie was a great storyteller, especially when talking about some of the first Crosby Tournaments and U.S. Opens. He was a walking encyclopedia on the game that he loved. He and Tom would become the first father-son duo inducted into the Fresno Athletic Hall of Fame.