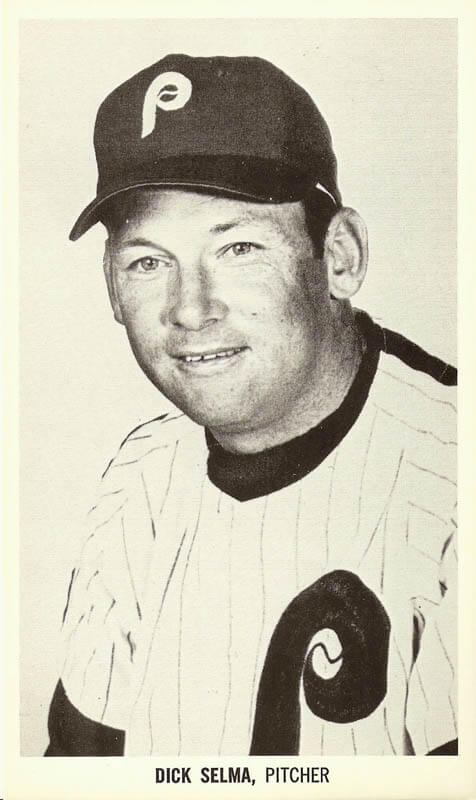 Long before he became a Hall of Fame pitcher, Tom Seaver envied the swift, strike-throwing skill of Dick Selma when they played together at Fresno High School. Selma was a senior member of the varsity squad in 1961 when Seaver, one year behind him, was playing for the junior varsity. That was the same year that Wade Blasingame was pitching for cross-town rival, Roosevelt. They were the guys," Seaver would later recall, "Striking out eighteen or nineteen guys a game. I didn't make the varsity until my senior year." Blasingame would later sign with the Milwaukee Braves, but his career would not turn out to be as noteworthy either Selma's or Seaver's, who both signed to play for by New York Mets.Prior to Selma and Seaver's varsity performances for Fresno High, the Warriors had fielded a remarkable team that included pitchers Dick Ellsworth, Jim Maloney, and Lynn Rube, and catcher Pat Corrales during the 1958 season.

Selma, the 5'11" and 160-pound right-hander pitched one season for Salinas of the Class 'C' California League before he was signed by the Mets in 1963. During his ten-year big league career, Selma would take the mound for the Mets, Cubs, Padres, Phillies, Angels, and Brewers. Selma, who compiled a 42-54 record during his major league career, distinguished himself by winning the first two games that he pitched as a rookie with the Mets in 1965, he was the pitcher of record for the expansion San Diego Padres' first game of their first season in 1969, and struck out 153 batters for a National League record as a relief hurler for the Phillies in 1970. Among Selma's best career performances was his second game in a Met uniform when he hurled a ten-inning, 1-0 shutout, striking out ten opposing Braves. The thirteen strikeouts stood as a franchise record at that time. He would then toil as a relief pitcher for the next two seasons.

Selma was back on the hill as a starter during the 1968 season when he was 9-10 in twenty-three starts with a 2.76 ERA and 117 strikeouts. San Diego drafted Selma as their fifth choice in the 1968 league expansion draft and that led to his historic first-in-franchise-history start for the Padres to open the 1969 season. An exceptionally hard thrower, Selma's deliveries were executed without a conventional windup; he was one of the earliest big leaguers to deviate from going into a full windup. During 840 innings through 307 major league games, Selma struck out 681 batters and walked 381 to compile a 3.62 ERA. He also picked up thirty-one saves and collected thirty-five hits, including five doubles in 203 times at bat for a .172 batting average. It was a brief stop in San Diego for Selma because he only worked four games before he was traded to the Chicago Cubs in 1969. He was 10-8 with the Cubs, following a brilliant 7-1 start, and then was swapped to the Phillies in 1970 for East Bakersfield's Johnny Callison and a player to be named later (Larry Colton). Working as a "closer" for the Phillies, Selma notched twenty-two saves in seventy-three games. He then finished out his career with the Cards where he didn't make a start, the Angels for eighteen games, the Brewers for two games, and the Angels again with no starts. Selma's final association with baseball after he retired was as an assistant coach at Fresno High and as a pitching coach for Clovis High. Selma passed away after a battle with liver cancer in 2001.