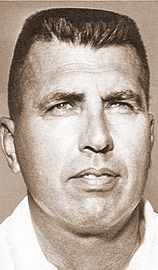 Slaughter still resides near Fresno City College with his wife Eveline, who teaches at her own private school. daughter, Julianne Ely also lives in Fresno and the Slaughters' two sons, Jeffrey and Jonathon, live in Merced and Illinois respectively. A third son, Jim, who played football for his dad at City College, has passed away. Slaughter declines to name a favorite athlete amongst those he coached, but he does name Gene Green, who played at Sanger High, as the best all-around athlete. What was his biggest coaching thrill? "It would have to be the first state championship we won in 1968," he said. "My son, you know, also played on that team." During six decades of football played by Fresno City College, forty-three of those seasons were on the winning side of the ledger, equating to .662 percent. The red and white uniformed Rams have logged an impressive 394 career wins in a state where junior college football has always been hotly contested and 122 of those moments of gridiron glory were stamped with Slaughter's initials.