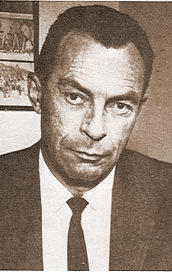 Had it not been for a tendon injury, track and field followers might have known the name Paul Starr in a different light. The University of Oregon sprint standout won a place on the 1932 United States Olympic team in the 100-meter, but sustained the injury prior to the Los Angeles-hosted Games and missed it. One year later, the tendon had healed and Starr placed second in the 100-meter and third in the 220-meter at the NCAA championships. Starr was also the 200-meter winner in the 1993 National Amateur Athletic Union championships. His best time in the 100 was 9.5 seconds when the world record was 9.4 seconds. Starr's best in the 220 was 20.8 seconds.

After completing graduate work at USC and Fresno State, Starr began his coaching career at Sierra High School in Auberry in 1937. He had moved to Tulare High School in 1940 and, when World War II started, Starr joined the U.S. Navy. Starr became the coach and athletic director at Edison High School following his discharge and moved on to Fresno City College in 1948 where he coached basketball and became the athletic director. Starr served for twenty years as a starter at the highly recognized Fresno West Coast Relays. Paul Starr died in 1975.