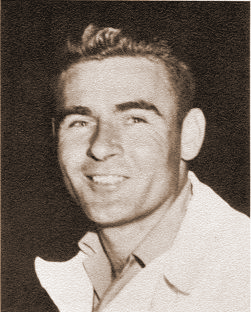 Although he was born in Montana, rugged Charles "Chuck" Stevenson wound up in Fresno where he graduated from driving street rods to steering hopped-up stock cars around dirt tracks to piloting precision-tuned Formula I machines at "The Brickyard" against some of the best drivers of the 1950s and 1960s. Chuck attended Sierra Union High School and Fresno State College. His racing took him and the other well-known Fresno-area drivers all over the map. In the tradition of most auto racers, Stevenson was hot-tempered, competing during a post-World War II period that pitted him against such princes of speed as Johnnie Parsons, Troy Ruttman, Duane Carter, Rodger Ward, Manuel Ayulo, and Fresno's own Billy Vukovich, "The Mad Russian."Tempers flared, Vukovich, Ayulo, Ward, Carter, Ruttman, and Parsons competed against each other with daredevil driving and fists often with Stevenson in the middle of the punching.

Stevenson started in nine Indy 500s between 1951 and 1965. He finished sixth in 1961, 12th in 1954, and 15th in 1960. His pal "Vukie" won his first Indy 500 in 1953 and his second speed classie in 1954. Although Troy Ruttman won the 1952 Indy 500, Stevenson won the USAC National Championship Rally that year. He also competed in five Formula I Grand Prix races, finishing 12th in 1954, 15th in 1960, and 18th in 1952. In addition to his USAC national title in 1952, Stevenson won the Milwaukee Mile Open Wheel Championship and the Rex Mays Memorial 100 both in 1954 in a car owned by one-time racer, car owner, and promoter J.C. Agajanian. Later that year, Stevenson was second in another Milwaukee 200-miler. Stevenson won the Touring Car Class in 1952 and annexed the 1953 Larger Passenger Car Class title in the 3,300-kilometer Carrera Pan-Americana in Mexico, driving in a 1953 Lincoln. Another of Stevenson' memorable races was the 1955 Grand National at Willow Springs, California.

He led during the first fifty-four laps of the eighty-lap race, clinching the win by holding off Marvin Panch in a 500-yard sprint to the checkered flag. As with many daring drivers, tragedy enters their lives either directly or indirectly and Stevenson experienced one of those nightmare incidents. He was driving the Kuzma-Offenhauser "Agajanian Special" in the Ted Horn Memorial at the DuQuion, Illinois State Fairgrounds on September 6, 1954 when he came up behind Rodger Ward. The two racers touched wheels and Ward spun into the pits, striking Clay Smith, the chief mechanic for "Aggie." Smith was killed instantly and eight other pit crew members were injured, but "Aggie" saved himself by diving over a pit area wall. Regrettably, Smith and Stevenson were buddies. Smith rode with Stevenson as a mechanic and co-pilot during Stevenson's two Carrera Pan-Americana wins in Mexico in 1952 and 1953. But he was closer to Ward, who credited Smith, a "Mechanic of the Year" award winner as being his mentor. Ward was so distraught he almost quit racing; however, the WW II fighter pilot stayed on course and won the 1959 and 1962 Indy 500s.