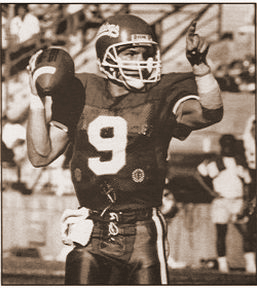 During the Kevin Sweeney era of Fresno State football, the Bulldogs won thirty-two games, lost thirteen and tied one, highlighted by an 11-0-1 season in 1985 in which they captured the PCAA Championship and California Bowl V. Many Division I programs recruited Sweeney as he posted record-breaking performances at Bullard High School, making it onto numerous All-League, All-Valley, and All-State teams. In 1981, Sweeney was named the Northern California Player of the Year after throwing a state record forty-two touchdown passes with twenty-six of them going to Peter Sartini, his old friend from Fresno's Gibson Elementary School. Even though Division I schools pursued, one coach had an edge, Sweeney's dad, Jim, of Fresno State University. Kevin said he chose to play for his father knowing it wouldn't be easy as the coach's son.

"I heard it when people would say Daddy's Boy' and I really heard it when we lost, but for the most part, it helped me get tougher," Sweeney said. "You have to be tough to play quarterback or be a coach or just be a football player, and, for the most part, it was great, especially when we won."And the Sweeneys did a lot of winning together. Sweeney graduated from Fresno State as the all-time leading passer in National Collegiate Athletic Association history, throwing for more than 10,800 yards. He broke Doug Flutie's record that was set at Boston College by more than 200 yards. During his time with the Bulldogs, Sweeney set or tied thirty school, conference, and NCAA records. His thirty 200-yard passing games tied an NCAA record. He won All-American honors in 1985 and 1986 and was the runner-up winner to Vinny Testaverde for the Davy O'Brien National Quarterback Award in 1986. In the same year, Sweeney finished 9th in the Heisman Trophy balloting.

The Dallas Cowboys drafted Sweeney and he was thrilled to play for legendary coach Tom Landry in 1987 and 1988. "It was a great experience, the team was awesome, and it was just great to be there. I couldn't believe I was getting paid to do it," Sweeney said. "Throwing over guys like "Too Tall Jones every day in practice was quite a chore, but it was a reality in the NFL. I even tried throwing under his armpit."

His less than six-foot frame didn't stop him from having some great games, though, including passing for three touchdowns against the New York Giants to fuel a Cowboy comeback win, and, in 1987, he had the 7th longest touchdown pass in the NFL with a seventy-seven yard bomb. Landry had high regard for the young quarterback and Sweeney became the third rookie QB ever to start for the Cowboys (Don Meredith and Roger Staubach were the others). Landry once told reporters in camp that he thought Sweeney could be the Cowboys' best passer. He said, "Kevin throws better. I just wish he was bigger." In 1989, Bill Walsh signed Sweeney to play for the San Francisco 49ers. At that time, the Niners had two quarterbacks by the names of Montana and Young. Though he appreciated that experience as well, he could see the writing on the wall. Sweeney returned to Fresno where his roots were deep. Although he moved around some as his father's coaching career required, Sweeney had childhood friends from Bullard High. The Sweeney Division I quarterback tradition continued when his son, Beau, landed a scholarship to play quarterback for the University of California, Berkeley.