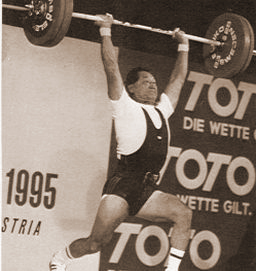 Dan Takeuchi didn't take up weight lifting until he was fifty-four years old, going on to win gold medals as well as break masters and age division tournament and world records well into his golden years.

Takeuchi was born in Fresno and graduated from Sanger High School. He spent two and a half years in a Japanese internment camp in Jerome, Arizona during World War II. His family lost their San Joaquin Valley farm before the ordeal was over. When he returned to the Valley, he became a truck driver. Much later, he turned to weight lifting as a stress reliever. Takeuchi started lifting weighted broom handles improve his physique and clear his mind after work. Not long after, he was visiting the Central Valley YMCA and lifting real iron. Soon, he was working out two or three times a week with steadily heavier weights. Once he began to compete, he knew he had been gifted with the unusual ability to lift weights several times heavier than his 165-pound body weight.

An industrial accident nearly destroyed his left shoulder in 1990, but he didn't stop and went on to win the U.S., Pan American and World titles. In 2002, Takeuchi was diagnosed with prostate cancer, but continued to lift weights while successfully battling this disease. He became a regular speaker at cancer support groups and an advocate for early-detection cancer screening tests. Takeuchi admitted that training got more difficult as he got older and he worried more about injuries, but he focused on keeping his hips and knees in good shape: "That's key to weight lifting." Takeuchi estimated that he has competed in some 80 tournaments in state, country, and international competition, including six world championships, a dozen Pan-Am Games, and six national championships. Along the way, he broke at least ten world records.

In July 2008, he competed in the 160-165 middleweight division in the Pan American Games in San Juan, Puerto Rico and set two world records. In the clean and jerk, he lifted 192 pounds, beating the world record by more than twenty pounds. He accomplished this feat despite only weighing 160 pounds at the time, slightly off his normal weight. Takeuchi also set two Pan-Am records, was voted the best in his age bracket, and was given the MVP Best of the Meet award for his overall performance.

Tommy Kono, one of the greatest weight lifters ever from the 1950s and 1960s with three Olympic medals, called Takeuchi an inspiration to older lifters. At the age of 66, Takeuchi was believed to be the first to lift 230 ¾ pounds above his head. When he was 68, he broke his own world records at the World Championships in Ontario, Canada with a clean and jerk of 231 ¾ pounds. After that meet, the U.S. team selection committee chose him to be the team flag-bearer for the opening ceremonies. "When you win a championship, you are a champion for one day because tomorrow is a new day," Takeuchi said.