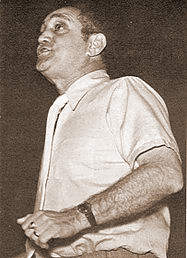 Few coaches have gained the national and international renown of Jerry Tarkanian. He is undoubtedly one of the most recognizable figures in his chosen sport and remains an unparalleled champion in the eyes of even the most scrutinizing of basketball fans. It's quite common to hear that someone has given 100 percent of themselves to their careers and those who have done so often wind up masters of their craft. "Tark the Shark" stands as the embodiment of that ideal. Tarkanian, who graduated from Fresno State in 1955, has always exerted maximum effort to excel, initially at San Joaquin Memorial and Redlands High Schools, Antelope Valley Junior College, Riverside Junior College, and Pasadena City College, followed by Long Beach State, University of Nevada, and Fresno State.

He ruled junior college basketball in California by winning three state titles at Riverside JC in 1963-1964, 1964-1965, 1965-1966 and a fourth at Pasadena CC in 1966-1967. Tark's insatiable appetite to succeed was fed by guiding UNLV's Running' Rebels to an NCAA championship during the 1989-1990 season plus three other Final Four berths in 1976-1977, 1986-1987, and 1990-1991 and fourth place in the 1979-1980 National Invitational Tournament. Tarkanian's superlative JC teams would post 145-22 record at Riverside and 67-4 record in Pasadena for a combined 212-26 total, making him the undisputable king of the two-year college cage culture. JC hoop buffs were being introduced early to Tarkanian's double-barreled strategic genius which combined a fast-breaking offense with a swarming defense. The defense would become famous when Tark went to UNLV, labeling it his "amoeba" defense.

Tark's winning ways didn't change noticeably in four-year college competition as he piloted his quality-crafted quintets to a record of 116-17 at Long Beach and a 509-105 record at UNLV. He came home to his alma mater, Fresno State to finish with a 153-80 record in seven seasons. To his credit, Tark turned the Bulldogs around during his first year back in Fresno. They were 13-15 before he arrived and then went 22-11 during his 1995-1996 homecoming. Two of his Bulldog teams qualified for the NCAA tournament and two others reached the NIT quarterfinals in the 1995-1996 season and the semifinals in 1997-1998.

Overall, Tarkanian-coached teams registered 778 major college wins against 202 losses, ranking him fifth on the all-time NCAA win chart. When adding his JC record, the numbers climb to 990-228. But those numbers alone do not reveal the enormity of Tarkanian's coaching genius. In addition to the 1990 NCAA title and three other Final Four berths, his teams won twenty-plus games in twenty-nine of thirty-one Division I seasons, second only to Dean Smith in NCAA record books. Tark's teams made it into the NCAA show eighteen times. The best win-loss seasons for Tark were 24-2 with Long Beach in 1973 and at UNLV he posted records of 34-1 in 1991, 29-2 in 1976, 37-2 in 1987, and 26-2 in 1992. Notably, he never experienced a losing season with any of his teams at any level.

He coached forty-two players who were drafted by the NBA, twelve of them first round draft picks. His son, Danny was an All-American guard for him at UNLV. Another son, George coached at the Community College of Southern Nevada. Tark was named Big West Conference Coach of the Year seven times, won the WAC Coach of the Year Don Haskins Award in 2001, and was named Coach of the Year by United Press International in 1983.

Throughout his career, Tarkanian was confronted by questions and accusations regarding his tactics and practices. He defended himself relentlessly and never let these off-court troubles interfere with his main mission: coaching champions of character. Many rival coaches have paid high tribute to Tarkanian, among them Mike Krzyzewski of Duke. "Jerry had consistent high levels of success," Krzyzewski commented, "Because his teams played hard defensively. He's one of the truly remarkable defensive coaches." Tarkanian was also an integral part of the efforts to build the Save Mart Center on the Fresno State campus. Since retirement, Tark has conducted a half-hour radio program, has a busy schedule of speaking engagements across the nation, shuttles between Fresno and San Diego, and still finds time to share with his wife, Lois, their four children, and ten grandchildren.