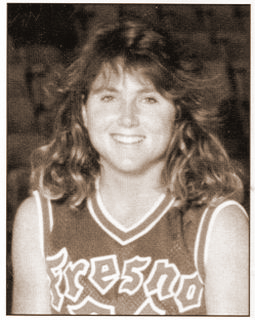 A quick 5-foot-4 point guard with a flair for big plays, Martell led Fresno State women’s basketball team to prominence in the 1980s, as the Bulldogs won 81 of 118 games during her four seasons.

She was a hit the moment she stepped into the South Gym following a standout career at North High in her hometown of Bakersfield. Before the school retired her No. 34 jersey, she would rewrite Fresno State’s women’s record book - setting 14 marks, earning All-America honors and being named the 1987 Pacific Coast Athletic Association Player of the Year. She left Fresno State having scored 1,595 points.

Martell averaged 13.6 points and 4.1 assists per game and made 78%of her free throws during her career. But the numbers offer only a hint of her importance to the women’s progrm. Martell’s wizardry helped the Bulldogs attract the sellout crowds to the tiny gym holding about 900 fans, and her glowing personality made her a role model for children and teenagers throughout the San Joaquin Valley.

Wrote the Bee’s Ron Orozco in 1987: "They stood in line to get her autograph or catch one of her smiles up close after every FSU home game. High school girls tried again and again to pull off ‘Wendy’ moves in their games. Anything to be like Wendy."

Said her coach, Bob Spencer, when she became the first Fresno State female athlete to have her number retired: "There is no one who has done more for the women’s basketball program at Fresno State than Wendy Martell." In 2001, she was honored as one of Fresno State’s greatest 25 athletes of the 20th century.

Martell excelled in the classroom, too. She made the Academic All-American team in 1987, graduated with a 3.7 grade-point-average as a physical-education major and won an NCAA postgraduate scholarship as Fresno State’s PCAA Scholar/Athlete of the Year.

Following her senior year, Martell signed to play in France. An Achilles’ tendon injury ended her professional basketball aspirations, so she returned to college, earning a Master’s Degree in marriage and family counseling.

In 1989, Wendy married Lance Taylor and they have four children: Bailey, McKenna, Sawyer, and Reese.