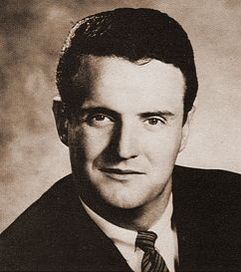 If Bernie Allard had been born in the era of big professional sports salaries, he might have had second thoughts about Hastings Law School, but he now knows that he made the right decision. Allard, a three-sport letterman at Fresno High and a two-time CIF state high jump champion, is an attorney in San Jose. "The only pro contract I was ever offered was by Eddie Erdelatz, coach of the Oakland Raiders," Allard said. "He asked me to be his kicker. I told him I was going to law school. He said, ‘If you flunk out, you have a job for $500 a month.’ I said to myself, ‘Yeah, and drive a truck in the off-season.’" Dave Brase, a football teammate of Allard’s at Fresno High, recalls a fifty yard-plus field goal that Allard kicked for the Warriors.

Allard was born in Missoula, Montana and his father moved the family to Fresno in 1946. Allard attended Heaton Elementary School, San Joaquin Junior High, and Fresno High School. He participated in football and track for Warrior coach Owen Ginsberg and basketball for Joe Kelly. His state winning high jumps were 6’6’’ and 6’61/4". When Allard graduated high school, he had seven football scholarship offers and planned to go to USC, but his mother won out and he went to Notre Dame. There, he confined his athletics to track and field. Allard set a Notre Dame record at 6’81/2" which stood for fifteen years. "I cleared 6’81/2" a number of times and I feel that I should have been in the 1956 Olympics. I was an alternate and I got to travel with the U.S. team all through the United States," Allard said. "I consistently beat the other two, but I didn’t make the team." Allard stated, "I copied the jumping style used by the great Russian Olympian Valeiry Brumel. He put the lead leg over the bar first and then pulled the rest of the body over. I tried seven feet a few times but never made it. My best jump of 6’10" was in Norway."

In 1956, Allard went on a Scandinavian twenty meet trip through Denmark, Sweden, and Norway. In those contests, Bernard went undefeated in the high hurdles and the high jump. He won the high school division in the high jump of the West Coast Relays three consecutive times. He did well in the university division in the discus, javelin, 440-meter, 220-meter, and relays. Allard said he thought about the decathlon, but he couldn’t pole vault. Allard said that the Scandinavian trip was a once in a lifetime experience. "It had to be one of the finest five and a half weeks of my life," Allard said. "There were four other American athletes and myself. Four hours after we landed, I was in my first meet. Not just my specialties [high jump and hurdles] but three other events as well. After that, we never stopped. We toured every town we competed and took in every possible sight. I had injured my left ankle [and] so had trouble with my high jump, but did make 6’83/4". I surprised myself with a 213-foot javelin throw. I also ran the high hurdles in 14.3."

When he returned to the United States, he participated in the Labor Day meet in Eugene, Oregon. He tied USC jumper Ernie Shelton for first at 6’6". Allard said he surprised himself by finishing second to Joe Shankel, an Olympian, in the high hurdles. Rafer Johnson was third. Allard had quite a career in athletics and now is excelling in law.