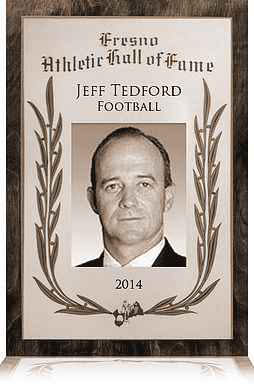 The Tedford name is synonymous with success, quarterbacks and high-scoring offenses. As a record-breaking quarterback under Jim Sweeney at Fresno State, he led the Bulldogs to the 1982 PCAA conference title and a last-second 29-28 victory over Bowling Green in the California Bowl.

As an offensive coordinator, he was pivotal in the rise to national prominence enjoyed by the University of Oregon in the late 1990s.

As an offensive coordinator, he was pivotal in the rise to national prominence enjoyed by the University of Oregon in the late 1990s.

​But the numbers, glossy as they are, don't begin to tell the whole story. Tedford earned acclaim for his ability to develop players, particularly quarterbacks. As a Fresno State assistant, he took Trent Dilfer from a raw talent into a first-round draft pick. With Oregon, he worked with future first-round picks Joey Harrington and Akili Smith and, at Cal, he oversaw the maturation of Aaron Rogers and Kyle Boller. Under Tedford, the Bears had eight players eclipse 1,000 yards rushing in a season, including future NFL star Marshawn Lynch.

​Tedford earned all-league honors as a quarterback at Warren High School in Downey, and played two years at Cerritos College before coming to Fresno State, where he threw 35 TD passes in two seasons. After Fresno State, he played six seasons in the Canadian Football League. At the time of his FAHOF induction, Tedford was offensive coordinator for the NFL's Tampa Bay Buccaneers.