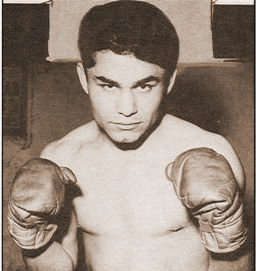 Born on the very first day of the 1940s, Gabe Terronez came to Fresno from the dusty streets of Corcoran after dropping out of high school following his sophomore year. Corcoran was a tough environment where childhood arguments and jealousies were not debated in a gentlemanly fashion; they were settled with flying fists. Little Gabe was often in the middle of playground scuffles. Maybe his choirboy looks-he actually did sing in one had something to do with the frequency of his fighting. His pals dubbed him the "Little Professor," not derisively, but out of respect, when he began taking classes at Fresno City College and boxing professionally at the same time. It was the epitome of conflicts for a fighter: textbooks versus left hooks. But the extremely ambitious and determined Terronez seemed to thrive despite this duality. He doggedly earned his Associate of Arts degree from City College and continued on to Fresno State where he graduated with a Bachelor of Arts degree in Spanish. Gabe did well in school and developed his skills as a boxer. As a welterweight, Gabe's quick hands, agile footwork, good jab, and strong punch produced a 30-3-0 record, including twenty-seven wins by knockout as an amateur. After earning $33 dollars in his successful professional debut against Chauncey Williams, Terronez would go on to compile a 32-8-0 pro record, including twenty-two knockouts.