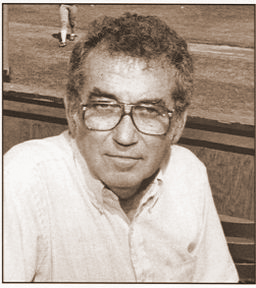 When Bill Thompson became general manager of the Fresno Giants in 1979, he would sit in the stands and listen to the patrons to come up with ideas for attracting more fans. He was a salesman for his team and the league in general. "When it comes to baseball, Thompson is like an old-fashioned pitch man, a fast-talking hustler. There is one major exception in this picture-Thompson is not a con artist," Terry Betterton wrote in a Fresno Bee story about Thompson the year that he was hired as general manager. It perfectly described Thompson. Donald William Thompson was the Fresno Giants' general manager for nine years. During his tenure, the Giants set league attendance records, despite playing in a park that was built in 1941 and finally torn down after the 1987 season.

Thompson was twice-named Executive of the Year in the California League. Thompson is also an original Fresno Athletic Hall of Fame board member and ran the popular Fresno Hot Stove League dinner for three years. He and his boyhood friend Lon Simmons, longtime San Francisco Giants broadcaster, used their influence to make sure Fresno had more than its quota of superstars, including Willie Mays once and illie MeCovey several times.Thompson had been to the big leagues as a color man for Simmons for a few seasons and as sports director for radio KSFO, and he also did some Giants TV. He returned to Fresno in 1975, where the Burbank native had started his career in 1957 as a salesman for radio station KMJ. He signed on with Bob Eurich Enterprises and had a sports program on radio station KMAK. Three years later, he was interim general manager of the Fresno Giants, landing the job permanently the following year. Promoting baseball was a natural fit, and Thompson was a workaholic. The games often ran late, but the next morning Thompson was in the office, focused on how to put more fans in the stands, along with his other duties.

Thompson knew the easiest way to fill seats was to have a superior team and over the years, he had sent a steady stream of players to the big leagues. Thompson used his promotional skills to draw crowds. Under Thompson's watch, his squad made it to the league playoff championships in 1985 and 1987. He had stated that the 1985 line-up was the best with players like second baseman Greg Liton, shortstop Mike Benjamin, third baseman Charley Hayes, pitchers Jeff Brantley, John Burkett, and Dennis Cook, who all made it to Candlestick Park. That was also the year that Will Clark joined the team in June and homered on his first trip to the Plate.

When the Giants moved the Fresno franchise to San Jose in 1988, professional baseball in Fresno waned despite Thompson's best efforts. After one season of the floundering Fresno Sun Sox, professional ball was gone until 1998, when the Fresno Grizzlies of the Pacific Coast League began playing at Beiden Field. The Grizzlies' eventual home, a beautiful downtown stadium, would undoubtedly have been the perfect venue for Thompson to excel at attracting and promoting local professional baseball.