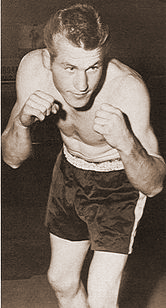 Born in Oak Grove, Louisiana, Wayne Thornton was part Irish and part Cherokee. He spent most of his youth growing up in Clovis. By the time he was eighteen, this young man knew what path he wanted to take in the world of athletics: he wanted to be a world champion boxer. Thornton was a friendly, handsome young fighter with all the tools that a champion would need. He had strength and an athletic body to go along with his great competitive spirit and work ethic and, under the tutelage of his manager, Pat Dikuria, his sights were set on his goal. DiFuria had a stable of fighters like "Bandit" Ben Medina, Gabe Terronez, and Mac Foster, all who had reputations as hard-hitting brawlers that went for the knockout at every opportunity. His fighters at the professional level had ninety-five knockouts among them and "Irish" Wayne Thornton had twenty-six of those.

Wayne finished his professional career with a record of thirty-eight wins, nine defeats, and one draw in his ten years in the professional ring from 1958 to 1968. Ten of his fights were on national television and that was largely due to Wayne’s rugged style which attracted big audiences. In 1966, Wayne fought for the light-heavyweight world championship against the great Jose Torres in front of a large crowd and a national television audience at Shea Stadium in New York. It was an incredible fifteen-round slugfest between the two warriors. Incredibly, Wayne was knocked down twice in the first round of this epic battle, but he recovered sufficiently to last the next fourteen rounds without hitting the deck again. That's the kind of gutsy brawler and "no quit" attitude that Wayne Thornton maintained throughout his entire career.

He had great fights with other champions including three wins over ex-champ Eddie Cotton, two in Seattle and the third at Madison Square Garden in New York. He also had three famous bouts, a win. a draw, and a loss to former champ Willie Pastrano in fights that were legendary. The first was at the Convention Center in Las Vegas and the second two were at Madison Square Garden again where he was a fan favorite. Other fighters who Thornton beat in his career were Charley Tombstone `` Smith'' and "Tiger" Al Williams. Another big date for the Clovis lad was a memorable decision defeat to Carl "Bobo" Olson at the Kezar Pavilion in San Francisco, also another nationally broadcasted main event.

The bottom line to "Irish" Wayne's faithful fans was that he always came out swinging. Due to such high demand by the media, Wayne was handsomely rewarded and he was able to retire comfortably. Wayne came back home to the Valley, opened an insurance company, and provided many insights to the boxing game on radio and television programs.