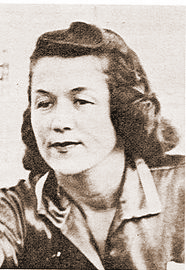 Bertha Reagan Tickey was one of the greatest pitchers in women's fast-pitch softball history with eleven national championships, but she is most proud of the title, "World Softball Ambassador." Tickey promoted fast pitch softball in China, Japan, Netherlands, Italy, and Australia. "This [Path for the Gold] tour was in 1965 and took fifty-two days," Tickey stated, "What came out of that tour is that all these countries have teams in the Olympic Games. When we made the tour, we took enough players for two teams because most of the countries didn't even have a team for us to play. Tickey toured the world for the following twelve years sponsored by Raybestos and the United States Chamber of Commerce. She also first introduced fast-pitch women's softball to the East Coast. Tickey left the Orange Lionettes where she had sparked three national championships for Connecticut at the invitation of the Raybestos Manhattan president. "I wasn't eager to leave California, but Orange had lost its sponsor, so I decided to go in 1956," Tickey said. The Brakettes finished third in the nationals in 1956, but two years later won the first national title ever for an East Coast team. Tickey played twelve years for the Brakettes during which time they won six more national American Softball Association titles. Tickey had planned to retire in 1967. One of the three Raybestos pitchers decided to go to graduate school and another was injured, leaving Joan Joyce to go it alone. At thirty-eight, Tickey came to the rescue, posting a 25-1 record and ending her career on a high. In the National Championship final game, Tickey struck out twenty of twenty-one batters for a perfect no-hitter.

With Raybestos, Tickey won 385 games and lost twenty-six. She was 757-88 with 162 no-hitters in her career. "I had six brothers and they taught me how to play baseball," Tickey said. "I started my career at thirteen with the Sultana girls. After playing against my brothers, it was no problem for me facing seventeen and eighteen-year-old girls. Then we moved to Dinuba and I pitched for the Alta Chevrolet team. I played there for a couple of years while attending Reedley High School. I got a call from the Orange Lionettes because they had seen the write-ups about me and their pitcher had broken an arm during a tour of China." Tickey played for the Lionettes while still in high school and had to have a chaperone, her brother, Sam. "Sam was a great baseball player and...Sam taught me how to throw a rise ball with a hop on it" Tickey worked for the City of Orange when she was with the Lionettes and did the same in Bushford, Connecticut while with the Brakettes. "Bushford held an annual Barnum Festival named after the famous promoter P.T. Barnum who once was the town mayor, explained Tickey. "It was patterned after the Tournament of Roses and was well-attended. I was director for eight years.

That's where I met and married Ed Tickey who once played for the Brooklyn Dodgers." When she began her career, the pitching distance was thirty-five feet and, by the time she finished, it was forty-three. Tickey said she constantly had to adjust her pitches to the distance. Tickey was a good fielder and a decent hitter with a .250 average. "You are as good as the ones you play and ourPacific Coast League was the best. Nearly every game was 1-0 or 2-1...Every team was good and every pitcher was good. That's why we were so successful in the nationals. We played the best every week. No one today could hold a candle to Kay Rich [Fresno's star infielder]. She was out of everyone's league. She played like a man. She was so good and a wonderful person, too." Tickey is convinced that most of the teams in that league could have beaten the best collegiate teams of today, even our strong national team. "I think college coaches control the girl's thinking too much. Everything is different. No one had to tell us what to do. We knew what to do every second." It was those six athletic brothers that taught her well and she took it from there.