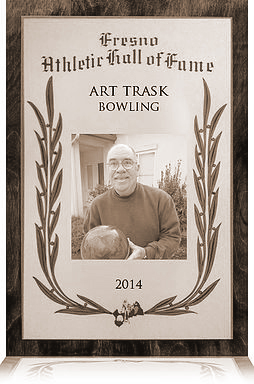 To say that Art Trask was born to bowl is an understatement. Raised in a family of bowlers in Miami, Fla., he picked up a ball at the age of 7. Five years later, he was the American Junior Bowling Congress national champion, the result of a 678 three-game series.

​Later moving to Fresno, he would claim the title of best bowler ever from Central California, having won 4 Professional Bowlers Assn. titles, finishing second in six PBA tournaments and appearing in televised national finals 21 times between 1973 and 1987.

​Known for his consistency and ability to hit the pocket in tough scoring conditions, Trask went head-to-head against the biggest names in bowling during an era when millions of Americans watched the televised finals of the PBA tour on Saturday afternoons.

​His best season was 1982, when he won three tournament titles and finished sixth in the money standings with $92,535. A year later, he opened the final match of the Fair Lanes Open with nine straight strikes and finished with a 275 to beat Hall of Famer Earl Anthony to claim the title in Baltimore. It was a mirror-image reversal of the 1974 Hawaiian Invitational when Anthony rolled a 299 to beat Trask for the crown.

​A tough competitor who didn't wilt under the glare of TV cameras and wasn't intimidated by Hall of Fame competition, Trask also beat Marshall Holman in the televised championship match of the 1982 Cleveland Open. Trask's best finish in a PBA major was his third place in the 1987 Tournament Champions won by Dick Weber.

​In addition to his high-profile PBA career, Trask is known to countless Fresno area bowlers for his pro shops and participation in leagues. He was inducted into the Central California Bowling Assn. Hall of Fame in 1994.