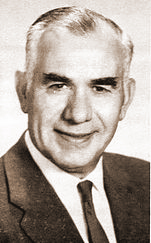 It was a long trip from Trombetta's birth place in Buenos Aires, Argentina in 1904 to Italy in 1907 and finally to Oakland in 1908. He played both football and baseball at Oakland and Stockton High Schools. Trombetta earned a Block 'S' at Stanford in football and also played baseball.

Tipping the scales at 153 pounds, he saw little football action as a backup for Stanford legend Ernie Nevers at fullback. He did participate in the 1925 and 1927 Rose Bowl Games. He graduated from Stanford in 1927 and earned his Master's degree the following year. Trombetta entered coaching in 1928 as a basketball assistant at Fresno High School. After three years at Ukiah High as head baseball and basketball coach and a single season at Stockton in the same capacity, he returned to Fresno to stay. When Leo Harris moved from Fresno High to head coach at Fresno State, Trombetta replaced him as football coach of the Warriors. His team won the Fresno County championship three years running and tied Bakersfield for the Valley crown in 1932. Trombetta also coached the track team and one of his athletes was Walter Marty, who broke the national high school high jump record and went on to break the world record at Fresno State. Bakersfield was the only team to beat his football teams and Hanford blotted an otherwise perfect record in track. In 1935, he was the first vice principal and then principal at Edison High. He also served as assistant superintendent of Fresno City Schools from 1944 to 1967. For thirty-eight years, he was part of the timer crew at the Fresno West Coast Relays. Mr. Trombetta passed away in 1983.