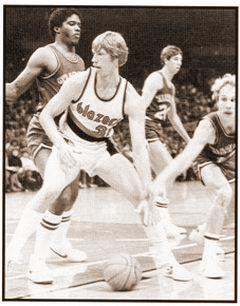 A stout defender, rugged rebounder and deft passer, the 6-foot-9, 215-pound center/forward was a key ingredient in Fresno State’s success during the Boyd Grant era and relied on those tools during five seasons in the National Basketball Association.

The Hanford-born Verhoeven was Grant’s top high school recruit in 1977 and he later became the highest Fresno State draft pick in 22 years when he was selected in the fourth round by the Portland Trail Blazers in 1981.

Many colleges recruited Verhoeven after he averaged 18.7 points, 12.5 rebounds, and 6.5 assists a game for Hanford High his senior season. While with the Bullpups, he was an all-league choice.

But Vehoeven chose to stay close to home and helped Fresno State post a 79-29 record during Grant’s first four seasons. The highlight: a 25-4 record, conference title, and NCAA Tournament appearance in 1981.

Verhoeven led the Bulldogs in shooting percentage in 1979 (.561) and 1980 (.571) and was a strong complement to front-liners Rod Higgins and Art Williams.

Because of Grant’s slow-down tempo, Verhoeven didn’t rack up big stats. But his hustle and understanding of the game caught the eye of pro scouts and Portland took him with the 85th overall pick.

Verhoeven shot 50.5% from the field and 68.9% at the free-throw line in the NBA and averaged 3.5 points and 2.3 rebounds a game with the Trail Blazers, Kings, Warriors, and Pacers.

His best season was his rookie campaign when he averaged 4.9 points and 3.6 rebounds in 71 games. That season scored a career-high 28 points in Portland’s victory over Seattle on Christmas day.

"My defense is my meal ticket in this league," Verhoeven said after his first season with Portland. Others thought so, too. Dwight Jaynes, a Portland sportswriter, observed in 1984: "He won the hearts of Blazer fans by making the team for the past three seasons in spite of long odds….He was a hard-nosed player who was appreciated for his effort as well as the results it got."