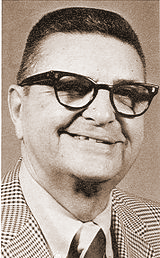 John G. Voenes was a remarkable person. Voenes, the son of Goodfellows Grill owner George Voenes, was the first Fresno State Alumni Executive Director in 1947, a job that he held for three years. The close-cropped hair, big smile, engaging personality, and strong work ethic served the school well. Voenes was a member of Sigma Alpha Epsilon at Fresno State and was one of 130,000 SAE members to have received the coveted SAE Alumni Award. His crowning achievement was brainstorming with former Fresno Bee sports editor Ed Orman and founding the Fresno Athletic Hall of Fame.

One hallmark of any Voenes project was it would be first class. In 1955, he went to work for Harry Cofiee's men's clothing store and immediately instituted the Harry Coffee Blanket Award for Excellence in high school sports. He later added the Harry Coffee Watch Award for the outstanding Bulldog Athlete of the Year. Voenes also penned a weekly column, "Coffee Break," about Fresnans and their achievements. Voenes traveled throughout the state to spread the word about the Fresno Athletic Hall of Fame. He recruited the aid of Bill Schroeder, founder of the Helms Athletic Hall of Fame in Southern California, and former Fresno High graduate and Pasadena sports editor, Rube Samuelson. The original Board of Directors was composed of Fresno businessmen Bill Spaulding and Mike Giffen, Lew Matlin, Thomas J. "Soup" Carothers, Al Dermer, Freddie Markarian, and Harry Moradian.

Samuelson put Voenes in touch with the Twin Wintons in Los Angeles who created and sculptured the distinct Apollo Trophy given to each Fresno Athletic Hall of Fame inductee. The Twin Wintons made a carving, the committee liked it, and a cast was made with the same finish as that on the prestigious Sullivan Award given to the U.S. Amateur Athlete of the Year. The same cast has been used for more than fifty years. The Inaugural dinner on November 4, 1959 drew eight-four people to honor six sports legends: Cornelius "Dutch" Warmerdam, Billy Vukovich, Frank Chance, Walter Marty, Ralph "Young Corbett" Giordano and Les Richter. Admiral Tom Hamilton was the speaker with Samuelson as the master of ceremonies. Even though memberships were open, it was an all-men's affair as it remained for a number of years.

Voenes was born and raised in Fresno. He first lived with his family in an upstairs flat within seven blocks of his father's eatery. He graduated from Fresno State in 1938 during the Depression and was forced to leave his hometown to find work. His first job was as a publicity, advance man, and director for the Carl Ravazza Dance Band which toured the country and played in the most prestigious hotels. Voenes told columnist Kathy Clarey of The Fresno Bee in a 1973 interview: "I was lucky. My writing background helped me and there were some public relations involved, too. It was nice living in hotels and having all the services. I enjoyed every moment of it." When World War II started, traveling was difficult, so Voenes returned home and did publicity work for the Sir Francis Drake Hotel in San Francisco. After three years, he went to Los Angeles for six months as a booking agent for entertainers. He quickly tired of the big city and returned to Fresno.

Voenes found his niche when several of the school's big hitters donated funds. Jim Mayer led the push and collected the money. "John did a great job," Mayer said, "He was just what we needed to get more alumni participation." In just three years, Voenes built a strong membership and produced a magazine that kept alums well-informed on all aspects of the college. In the early 1950s, Voene's father died and he inherited the Goodfellows Grill with his mother. He managed the eatery for five years and was then advised by his doctor to find another profession. That's when he joined Harry Coffee's in the public relations department. During a trip to Los Angeles to honor an athlete, he met Vera who became his wife in 1962.