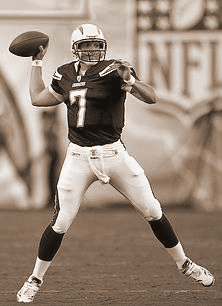 During 10 National Football League seasons and a standout career at Fresno State, the Volek name became synonymous with passing accuracy and command of the quarterback position.

After leading Clovis West High School to an 11-1 record and claiming league Offensive Player of the Year honors in 1994 as a wing-T quarterback, he was recruited by Fresno State Coach Jim Sweeney.

Volek matured physically during his redshirt season and following Sweeney's retirement blossomed into a three-year starter under Coach Pat Hill. He threw nearly 1,000 passes at Fresno State and suffered just 12 interceptions while throwing for 57 touchdowns and completing 60.1 percent of his attempts.

His 1999 season was one for the NCAA record book as he passed the Bulldogs to a Western Athletic Conference title and a berth in the Las Vegas Bowl. Volek threw for 2,706 yards and 30 touchdowns and, amazingly, had just three interceptions in 383 attempts, setting the NCAA season record for lowest interception percentage.

Volek signed with the Tennessee Titans as a free agent in 2000 and made the most of the opportunity. Primarily a back-up, he shined when called upon and in 2004 enjoyed his best pro season while starting eight games in place of the injured Steve McNair.

Volek played in 10 games overall that year and passed for 2,486 yards and 18 TDs --including back-to-back four-touchdown, 400-yard games against Kansas City and Oakland.

In 2007 playoffs, while with San Diego, Volek experienced the satisfaction of replacing the injured Philip Rivers in the divisional round against Indianapolis and scored the winning touchdown on a 1-yard sneak in the Chargers' 28-24 road victory.

Volek was accurate with the football from beginning to end. He completed 60.5 percent of his NFL passes, with 26 touchdowns and just 13 interceptions.