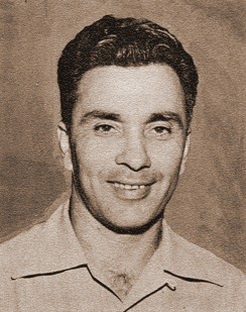 Billy Vukovich Sr., a child of the Great Depression who helped his mother and siblings after his father died, grew up to be one of the most fearless and talented drivers to ever conquer the famed Indianapolis 500 Brickyard. Although the media called Vukovich the "Mad Russian" which he despised, he was Yugoslavian and certainly not mad. Born in Oakland and raised in Fresno, Vukovich won back-to-back Indianapolis 500 races when it was the premier auto racing event in the world. He was the first of three generations to race the Indy 500. Vukovich was killed in 1955 at thirty-six, trying for a record three Indy wins in a row. He had lapped all but six cars, but was forced to swerve to avoid an accident. He was hit by another car and killed when his car nearly vaulted over a wall. It tumbled onto a service road and burst into flames. Investigators concluded that he was likely to have died before the fire.

Vukovich was the third of eight children born to immigrants John and Mildred Vukovich, who came to the United States in 1909 from Yugoslavia. After a short stay in Leeds, South Dakota, the couple settled in Oakland, then Kerman in 1920. The family rented a farm in Sanger and John's dream was to own property, but his ambition was thwarted by the Great Depression. His father died when Bill was fourteen and he and brother, Eli, were forced to provide for their sisters and mother. Bill had to drop out of school. He spent long hours working in the fields just to make ends meet. Hard times drove Bill to make something of himself. He cared for his mother until she died in 1939. Oldest brother Mike was the first of the three brothers to try auto racing. Billy Vukovich took to the track as a teenager and became the king of midget racing when the sport was drawing capacity crowds everywhere in the mid-1940s. Fresno Airport speedway attracted crowds of 18,000 to watch their hometown hero in 1945 in the first post-war race. Vukie won the feature and was the toast of Fresno. Many future Indy winners like Troy Ruttman, Johnny Parsons, Jim Rathmann, Ed Haddad, and Pat Flarety were midget drivers in California.

After making what was big money in those days on the midget circuits, Vukovich resisted the chance to go east and try the big cars in the AAA competition, but by 1949, the racing craze diminished with the advent of television. The first time that he saw the Indianapolis Speedway, he was awed. The first time he tried it, he knew it was made for him. He failed to qualify on his initial attempt and his car quit after twenty-nine laps during the race in 1951, but he was so impressive that Jim Travers, Frank Coon, and Stu Hilborn asked him to join the Keck team. The rest is history. He headed for his first Indy 500 win in 1952 when a small timing pin broke, sending him into a wall with eight laps to go. In 1953, Vukovich turned in arguably the greatest performance in Indianapolis 500 history. The temperature at race time was ninety degrees with equal humidity. The track temperature soared to 130 degrees. Author Bill Gates wrote in his book, Vukovich, that only five drivers completed the entire 500 miles. At the halfway point, fourteen drivers out of twenty-three were left or had changed drivers and, in some cases, it took three drivers to finish. One driver died of heat exhaustion as did a spectator and nearly 100 others had to be hospitalized. Vukovich, who had won the pole, led for 195 of the 200 laps. He broke every speedway record from one mile to 425 miles. Only a brief period of yellow lights prevented him from setting a 500-mile record.

Vukovich's childhood of harvesting various crops under the blazing San Joaquin Valley sun had served him well. Still, he lost eight pounds from his slender frame during the race and had to be helped out of his helmet after crossing the finish line. He collapsed in a chair covered with sweat and oil. Vukovich was called the "Heartbreak Kid" in 1952, but a year later, he became known as "Indy's Iron Man." The Howard Keck-owned "Fuel Injection Special" was designed by master mechanics Travers and Coon and ran to perfection. Their choreographed pit erew work set a new standard. The car was fueled and had four tires changed in forty-eight seconds on its first pit stop with all three stops consuming little more than two minutes. At each stop, Vukovich took two cups of water, drinking one and pouring the other down his back. After the first turn, Vukovich had a seven-car lead. He won by eight laps. Despite the heat, it was Vukovich's most dominating performance.

In 1954, everything that could go wrong did for the aging "Fuel Injection Special." It was nip and tuck as to whether Vukovich would make the race field. Loss of power caused Coon and Travers many sleepless nights. The team missed the opening weekend, so Vukovich had no chance of being amongst the first ten cars. He qualified after a piston problem was solved and a cracked block replaced, but had to start in the seventh row and 19th position. Coon and Travers still weren't satisfied, but Vukovich assured them the car was fit and he could win even from the 19th position. Just a day before the race, Coon, who Travers called the best engine man ever, hand-tooled some grooves in each piston and that was the final change that counted. Vukovich stumped the experts. His close friend, Jack McGrath, had shattered the qualifying records and won the pole, but Vukovich told one writer, "I didn't come here to lose. I came to win. I wouldn't take second place money now if they offered it to me." Vukie wasn't saying that in a boastful manner; he was just confident in his car, his crew, and himself.

When the race started, Vukovich passed eight cars in the first two laps. Just before the halfway point, Vukovich caught leader McGrath and passed him on turn four, for his second pit stop, he was never out of first place. He finished a full lap ahead of runner-up Billy Bryan. In 600 laps in three 500s, Vukovich had led 435 of them. In 1955, Vukovich was forced to change owners when Keck determined that the new car that Travers and Coon were putting together would not be ready. So Vukie signed with Florida millionaire Lindsay Hopkins with the stipulation that Travers and Coon would come with him. Hopkins readily agreed. Vukovich was killed in the Hopkins car. His grandson, Rick Vukovich Amabile, recounted in the movie, Vukovich Home Racing Movies, Etc., that Travers had said that Vukovich was in a different mood before the start of the 1955 race. "Usually, Billy was anxious to get started, but this time, he just sat in his car with his head down. Perhaps he had a premonition of what was to come," Travers said.

Vukovich, who had married Esther Schmid in 1940, had a daughter, Marlene, and son, Bill Jr. who went on to compete in the Indy 500. Bill Jr.'s son, Bill III, was a promising driver when he was killed on the race track at twenty-seven. Amabile said hardly a day passes that someone doesn't call and wants to take a picture of the Vukovich house. His legacy is still remembered by many racing fans around the world even after more than fifty years.