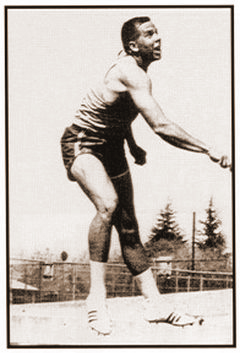 John Warkentin's trip to Fresno from India, where he was born to missionary parents, was precipitated by the tragic accidental death of his father and the fact that both sets of grandparents lived in Fresno. He attended Webster Elementary School and Washington Junior High. Warkentin's Washington coach, Dean St. John, was the person who introduced him to sports. "Dean was somewhat a legend as a coach at that time and I played on his basketball teams and he started me in track through his gym classes," Warkentin said, "I was able to win the Fresno City Junior High track meet discus throw and was second in the high jump and 660 race. I had never heard of the decathlon at that time, but I was involved in multiple events. I was fifteen in the ninth grade at Washington and finished in June 1962. The following fall, I went to McLane High, where my sports career blossomed."

Warkentin ran cross country when he enrolled at McLane High School in his sophomore year because he had a cousin on the team. He also learned the discus from his brother Paul on the asphalt street in front of his house. Paul, who was a father figure to John and was a star football player at McLane and Fresno State, died in 1996. John was 6'2" and 190 pounds. He played football and basketball in his junior and senior years. John was a linebacker on defense and a tight end on offense in football, earning All-City honors during his senior year.

Basketball was his first love and he was the starting center under Al Cano and Lowell Reynolds. Warkentin's jumping ability allowed him to play center against opponents often two to four inches taller. McLane won league championships in both seasons. The team speed, which included a suffocating full court press, enabled the Highlanders to prevail. Warkentin was All-City both years.

In track under coach Jack Wilcox, he threw the discus and high-jumped, but seldom ran any races. Since his brother had starred at Fresno State in football (center) and track (discus), John enrolled at Fresno State on an academic scholarship. After his freshman season, he realized he was too short to play center, so he dropped his favorite sport to concentrate on track where he wasn't sure on what event to concentrate on. He began to read about the decathlon, since both Bob Mathias and Rafer Johnson were Olympic gold medalists. "It was definitely a learning experience for someone who had never hurdled, never thrown a shot, a javelin, pole vaulted or long jumped, let alone never ran 100, 400, or 1,500 meters."

"My coaches, Dutch Warmerdam and Red Estes, devoted a lot of time in teaching me the various events. There was no decathlon in our conference at that time, so the first one I entered was in the Mt. SAC Relays. The only reason I got in with no experience was because Dutch knew the meet director, Hilmar Lodge. The decathlon official was not happy because he already had the field set. I finished fourth or fifth and had no trouble from then on and progressed rather quickly." Warkentin said learning to pole vault with a fiberglass pole was his toughest experience. More than once he landed outside the pit with a painful outcome. He also had a few scary moments with broken poles.

His first AAU meet was at UCLA, where Bruin coach Ducky Drake was the director. John placed 8th, his lowest finish -for the next twelve years. It was his strength, competitive nature, and consistency that kept him in the national and international decathlon spotlight. He finished second to Bill Toomey in the 1968 AAU meet and was selected to the USA International team where he competed in England, Germany, and Romania. John shocked the track and field world by winning the 1970 National AAU Decathlon Championship in South Lake Tahoe. He didn't come in first in a single event, but finished second or third in most to score 8,000 points for the first time. Warkentin's lone regret was that he didn't make the Olympics. He was in the Trials four times and just missed making the cut in 1979. At Lake Tahoe in preparation for the Mexico Olympics, he hit a hurdle hard and ended any chances. From then through 1979, he competed in foreign countries as part of the USA National Team.

Warkentin's highest point in his estimation came in 1977, when he finished third in the USA-Russia meet with 8,031 points, but placed ahead of the Russian world record holder. In several meets, he defeated Bill Toomey and Bruce Jenner, only to have them "take off'' and become gold medal Olympians. "What a lot of the decathlon competition boils down to is who can stay healthy," Warkentin said. "I had a real good year in 1978, but in 1979, I was injured much of the time. I had two children by then, I was thirty-two, and the writing was on the wall, so I quit. In 1982, my brother Paul and I started Fotech Color Labs in Fresno and operated the business for thirteen years." Warkentin moved to Santa Barbara with his wife and three children and was also involved in real estate.