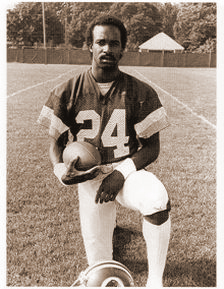 Anthony Washington was born to be a football player and was a standout on every step of the ladder from Spartan League to Fresno High School, Fresno City College, University of California, Fresno State, and finally the big prize, the National Football League.

Washington had the physical body college and professional scouts long for in cornerbacks when he graduated high school. He was named All-Metro in football with a career high of thirteen interceptions and was a standout hurdler for the Warriors. He took his 6'3" and 200-pound frame to Fresno City College, where among his most remarkable plays were a ninety-nine yard interception touchdown and a ninety-six yard punt return after which he was chosen a second team All-American. He doubled as an All-State hurdler for the Rams. His size and speed attracted offers from several colleges and universities. Washington chose the Golden Bears at Berkeley under Coach Mike White. His junior year he was All-Pac 10 and led the team in interceptions with six, including touchdowns returns of seventy-nine yards against Georgia Tech and fifty-five yards against another team. Eventually, he left the school and returned to Fresno.

Bulldog coach Jim Sweeney welcomed him with open arms. Washington rewarded Sweeney's confidence with an All-PCAA, All-Coast and All-American honorable mention season for the Bulldogs. He also did well in the classroom. An additional Fresno bonus was he was able to team with his younger brother, Tim, another fine Bulldog cornerback. Washington was contacted by several NFL teams, but he and his family were elated when as Sweeney had predicted, he was drafted.

Washington was drafted in the second round by the Pittsburgh Steelers in 1981, the 44th player taken. The selection came after an outstanding game in the East-West Shriners game in San Francisco, the highest round draftee at the time for a Fresno State player. In a Fresno Bee story on the day of the draft, Anthony was quoted as saying "Going to Pittsburgh that early surprised me; although I was kind of hoping Pittsburgh would be the team because they have a winning tradition. Their scout [Dick Haley] was out at Fresno State a lot." Then Fresno State athletic director Russ Sloan stated Pittsburgh was the perfect fit because traditionally the Steelers were noted for their strong defense. Washington hoped to learn from Pittsburgh's All-Pro player, Mel Blount. Haley said Washington had the size and speed that characterized Blount. He played two seasons for the Steelers, then was traded to the Washington Redskins where he started in Super Bowl XVII. Washington showed the Redskins his ability in tracking the ball with five interceptions for the 16-3 team in 1983, including one against the Los Angeles Rams in a playoff game.

Washington also was known for his special teams play with the Redskins in 1984, when he was credited with sixty-four hits and fifty-one blocks on punt returns. With Pittsburgh, he started the first year and intercepted three passes. His second year with the Steelers was notable for blocked punts and field goals as a member of the special teams. Washington's mother, Ella, perhaps said it best, "Football has been Anthony's game ever since he was in Spartan League football, winning trophies in the Raisin Bowl. I can say he eats football; we think he is great."