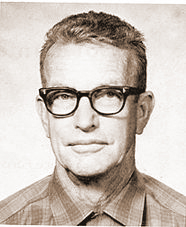 The Kingsburg native Anderson was a starting guard at 150 pounds on the unbeaten 1930 Fresno State football team and received honorable mention on the Little All American team that year. He was a key player on opening holes in the line for stellar running back Stanley "Frenchy" Bordagary and a hard-hitting tackler and blocker. Anderson was no surprise for Fresno State coach Stan Borleske. In his senior year at Kingsburg High School, Anderson captained the Vikings who lost to Fresno High 23-13 for the Valley Championship. It is difficult to picture the easy-going, pipe-smoking Anderson as a tough football player. He was a jack of all trades and master of many at Fresno State where he was hired as athletic equipment manager following his graduation in 1932. At the urging of another Fresno Athletic Hall of Famer Goldie Long, Anderson took up the sport of archery. He became the "Robin Hood" of Fresno, winning city titles from 1935to 1942. His high scores of 714 placed him among the best archers in the state. He continued as equipment manager and was Equipment and Field Manager for the famed West Coast Relays for many years.

Following two years in the Navy during World War II where he served as a physical education trainer, he was elevated in 1948 as Director of Intramural Sports at Fresno State, a job he kept until retiring in 1973. Anderson also coached the tennis and swimming teams in 1948. He was a real pleasure to be around and an excellent outdoorsman.