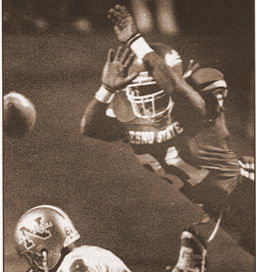 J.D. Williams arrived at Fresno State on a track scholarship, but after a walk-on tryout for the football team, starred in both sports and was the first Bulldog ever selected in round one of the NFL draft. Buffalo picked James D. Williams in the 1990 draft as the 16h pick overall. Williams played in four Super Bowls with the Bills and also suited up for the Arizona Cardinals, the San Francisco 49ers, and the Carolina Panthers in his seven-year NFL career.

At Fresno State, the Coalinga High School graduate was a two-time All-Big West first team selection and a second team All-American cornerback as a senior. Williams helped the Dogs to two bowl games, beating Western Michigan in the 1988 California Bowl and Ball State in the 1989 California Raisin Bowl. He was the most valuable defensive player of the East-West Shrine Game after an outstanding senior year. Williams also helped FSU track coach Red Estes' teams win Big West Conference titles in 1988 and 1989. He was a sprinter, competed in the triple jump, and was on the 400-meter relay team that broke the school record of 40.18 seconds. In the triple jump, Williams was ranked 15h in the National Collegiate Athletic Association championships.

After his professional football career, Williams returned to Fresno State in 1997 as a graduate assistant under the Bulldogs' new coach, Pat Hill, beginning a long career as a secondary coach at such stops as Cal Poly, San Luis Obispo in 1998, San Jose State in 1999, and then back to Fresno State for two seasons from 2000 to 2001. During that time, Fresno State posted an 18-7 record and made two bowl appearances. From 2002 to 2005, Williams coached at University of California, Berkeley and helped lead the Bears to a 33-17 overall record and three bowl game appearances. Cal topped the Pac-10 in pass efficiency and scoring defense and the Bears were second in total defense. In 2006, Williams was named assistant coach for the University of Washington Huskies.

Williams was one of four brothers who played football at NCAA Division I schools. His older brother, Dave, was a wide receiver at Fresno State in 1983-1984. His younger brother, Curtis, played at the University of Washington. Tragedy struck the family when Curtis, playing on a slippery field at Stanford, collided with a Cardinal fullback. He was paralyzed with a spinal chord injury and died nineteen months later in 2002. Largely because of Curtis, Williams left Cal when he was offered the post at Washington. "You never forget your brother," Williams said. "Just being in Seattle on campus, it's Hey, my brother was here.' You think about it. He's with me all the time." Another younger brother, Paul, was a star wide receiver at Fresno State and is now catching passes for the Tennessee Titans. Williams is married to Jami and lives in Washington with their children, Nicole, Kyra, a Zoe.