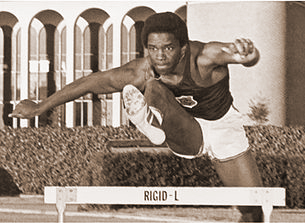 Taking up the hurdles in junior high school, Wilson blossomed into a 6-foot-2, 190-pounder and a world-class star during the golden age of track and field in the 1960s and 1970s.

During his career, Wilson beat many of the best hurdlers of the era, including fellow American Charles Foster, a world record-holder, and France’s Guy Drut, a silver and gold Olympic medalist.

Wilson came to prominence at Fresno’s Roosevelt High School, competing for Coach Ken Dose. As a senior in 1969, Wilson’s record-setting performances carried the Rough Riders to the Central Section team title and a runner-up finish at the state meet.

He swept the 120-yard high hurdles and the 180-yard low hurdles in the Central Section meet and, again, at the state meet at UCLA. HIs time of 13.7 seconds in the 120 lows equaled the state record, and he narrowly missed another state record with an 18.3 in the 180 lows, holding off future NFL wide receiver Larance Jones.

Wilson was the Central Section’s track and field athlete of the year and top performer at the state meet.

The titles continued for Wilson at Fresno City College, the University of the Southern California and with the famed Beverly Hills Striders club team. Wilson won consecutive state junior college crowns in the 120-yard highs for the Rams in 1970-71. The 13.4 mark posted at Fresno CC remained the school record upon his selection to the Fresno Athletic Hall of Fame.

He didn’t skip a beat claiming the NCAA crown in his signature event in 13.4 seconds in 1972. While at USC, Wilson helped the Trojans to an NCAA Indoor championship and a second place in the NCAA Outdoors.

Hamstring injuries hampered Wilson’s later career, but he put everything together in 1975 at the AAU Championships, winning the 110-meter highs in 13.38 seconds - fifth-best mark in the world that year.

Wilson, who had represented the U.S. on the national team that competed in Southeast Asia in ‘75, placed fifth in the 1976 Olympic Trials, missing a chance to join fellow Fresnans Randy Williams and Maxie Parks at the Montreal Games. In 2000, Wilson was honored with USC’s presitigous Heritage Award.