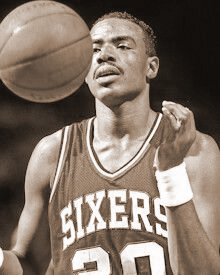 Talk about a diamond in the rough; Ron Anderson was a find for sure. In the early 1980s while Frank Carbajal was head basketball coach at Santa Barbara City College, he was told by one of his players about a kid in Chicago who was a playground legend of sorts. That young man was Ron Anderson, who was from Cabrini Greens, one of the toughest areas in all of Chicago. At twenty- one, he had never participated in organized basketball. Coach Carbajal wondered if the kid would be able to play under control given his lack of experience indoors. After meeting with Anderson, the coach decided to give him a shot. Coming into Santa Barbara Community College's gym the first time, Anderson stood at 6'7" and weighed in at 165 pounds. Carbajal taught Ron a drill which was confusing to the "youngster. Having to take a phone call, Carbajal was gone for over an hour and when he got back, the kid was still working on the drill, trying to get it right. At that point, the coach knew that he had a player that he could work with. "He was pretty raw and he was the worst player we had in late August, but he was a hustler which earned him a starting spot. He was the best player in our league by November and the best in the state by the season's end," remembers Frank Carbajal. Post- Santa Barbara, Anderson was recruited by many schools, but chose Fresno State because of Ron Adams, an assistant coach and recruiter under Boyd Grant. Coaches Adams and Carbajal had worked together at FSU and they thought Anderson would be a great fit for the Bulldogs.

The Fresno State Bulldogs basketball team was on the move in 1982 when Anderson joined the "Grant Era" ranks. In his two seasons at the school, Ron was a two-time All- PCAA performer while leading the Bulldogs to championships. This included the school's first Division I National Championship title at the 1983 National Invitational Tournament (NIT). On that team, Ron hooked up with Bernard Thompson and the two became known as the "Bookend Forwards. That helped the Dogs knock off UTEP, Michigan State, Oregon State, Wake Forest, and DePaul to take the NIT crown while accumulating many fans across the country. Ron Anderson was named MVP of that 46th annual NIT. In 1984, Anderson was selected by the Cleveland Cavaliers in the second round of the NBA Draft as the 27th pick overall. At twenty-six, Ron was the oldest rookie in the NBA draft. That fact did not stop him from playing ten years in the league. He had stints with the Cavs, Indiana Pacers, Philadelphia 76ers, New Jersey Nets, and the Washington Bullets. He scored 7,056 points while grabbing 2,312 rebounds, and handing out 952 assists during his career. His best NBA years were with the 76ers, averaging in double figures in scoring in four out of his five seasons.

After the NBA, Ron competed for another seven years in professional basketball overseas for such teams as Maccabi Tel-Aviv, Mont LeMans, Angers, and others. At fifty-one in 2009, Ron was living in France and playing ball for La Seguiniere in the French National 3 Amateur League. "I really can't explain it," Ron told Matt James of The Fresno Bee, "I think it's very, very exceptional. Basketball is in my blood. You can't imagine how much I love it."