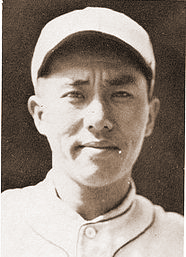 Nicknamed the "Dean of the Diamond" in Kerry Yo Nakagawa's superb book Through a Diamond: 100 Years of Japanese American Baseball, Kenichi Zenimura, a five-foot dynamo and native of Hiroshima, Japan, earned the title with room to spare. He was a player, an organizer, a manager, a husband, and a father under some of the most difficult conditions imaginable. Zenimura was still a youngster when his family moved from Japan to Hawaii. It was in that beautiful setting that he was introduced to the game of baseball at twelve. He first displayed his leadership skills as captain of the Mills High School team that won the Islands High School championship in 1918. Fresno became his home when he went to visit a relative in 1919 and, a year later, he took up residence. Zenimura's passion for baseball knew no limits and he was still an active player at fifty-five. At seventy-three, he was tragically killed in an automobile accident.

When Zenimura reached Fresno, he immediately founded the Fresno Athletic Club. Later, he played for two Fresno Twilight League teams. Zenimura organized the Fresno Nisei All-Stars team in the early days and led them to two state championships. He managed, played shortstop, and was team captain of those championship teams. He wanted to expand the cultural heritage and competitive skills of his players, so he arranged trips for his Nisei All-Stars to Japan in 1924, 1927, and 1937. He also scheduled home games against teams from the Negro Leagues and the Pacific Coast League. In 1927, he was able to participate in an exhibition game in Fresno against a team of major league players headed by the immortal Babe Ruth and Lou Gehrig. However, all his pre-war activities paled by comparison to what happened after the Japanese bombed Pearl Harbor, bringing the United States into World War II.

Zenimura's real legacy was established in the dank, hot Japanese internment camp in the Gila River Indian Community in Arizona. The Zenimura family were among the 120,000 Nisei citizens who were sent to assembly centers and then to internment camps. The family was forced to sell their home and many of their belongings on short notice for ten cents on the dollar. They were housed for six months in disgraceful conditions in horse stalls at the Fresno District Fairgrounds. Zenimura was able to line up tractors, some carpenters and lumber, and clear off an alfalfa field on Butler Avenue to build a ballpark near the fairgrounds. There was no grass, but Zenimura still organized a league. Later, the family was sent to Gila, Arizona and they had barely settled before Zenimura's mind was planning a baseball park. There were thirty-two blocks in the camp to house the people and each block had a baseball team. Zenimura arranged the teams into three categories. Class A for experienced players, B for high school, and C for junior high.

Howard said a gate was cut in the barbed wire fence surrounding the camp, opening the way to build Zenimura's "field of dreams." "All the camp roads were dirt, so they had a number of graders to maintain them," Howard said. "One of the drivers was Japanese and he leveled the infield. We screened rocks and made stacks. When the grandstand was completed, we put the rocks underneath to keep down the dust." "Building the park was hard work, but a lot of fun," Howard said. "My dad, my brother, and I along with a few kids worked from early morning to noon, had lunch, a nap, and got the field ready to play. That was the routine for most of our four years in camp."

Since the Zenimuras lived in a corner barrack, Howard's father dug a ditch from the laundry room to the field and laid a pipeline. At night, he would connect the laundry room pipe to his line and direct the water to the ballpark. Zenimura ordered equipment from Homans Sporting Goods in Fresno and women sewed uniforms from bedding material. Zenimura paid Homan's from contributions taken at the two park entrances. The park held about 3,000 people, but when the A teams played or for an Al-Star game, it was standing room only. In 1945, Zenimura arranged a game for his high school team against a Tucson High School team that had won three straight state championships at Gila Park.

Tucson pitcher, Lowell Bailey was undefeated in 1944 with a 0.0 ERA. Zenimura's team scored ten runs off Bailey, but with a tied score, the game went into the tenth. With bases loaded, Harvey Zenimura singled to left to win the game. On November 10, 2005, Arizona Governor Janet Napolitano issued a proclamation designating Kenichiro Zenimura Day in honor of his role in building the park for the interned Nisei.

Following the war, Zenimura returned to Fresno with nothing. He organized the Fresno Nisei team that won the National Nisei Championship against Denver which was played in Fresno. Howard and Harvey Zenimura went on to Fresno State. Howard said he learned so much from the Nisei veterans and his dad that he had no trouble making any team. "I joined the Army and made the team in Virginia," Howard said. "They transferred me to the Military Intelligence School in Monterey and I made that team. Then I went to Fresno State with Pete Beiden and had no trouble making that team." Howard is a member of the Fresno State Baseball Hall of Fame and Harvey went on to play several seasons with the professional Hiroshima Carps. Howard followed his father's lead and for many years, took local high school all-star teams to Japan.