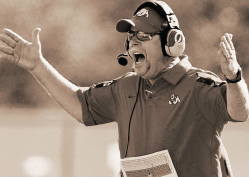 The former UC Riverside offensive lineman elevated the Fresno State football program into a nationwide household name and an ESPN television staple with his "anybody, anytime, anywhere" mantra during 15 seasons as Fresno State’s head coach.

Not only did the Bulldogs post a 112-80 record and go to 11 bowl games during the Hill era, but they racked up 17 victories over BCS automatic qualifying conference teams. Among their victims: Wisconsin, UCLA, Washington, Kansas State, Georgia Tech, Oregon State and Colorado.

In 1999, Hill’s third season as head coach, the Bulldogs went 8-5 and won a share of the Western Athletic Conference title. But that was only a sign of things to come. From 2001 through 2004, the Bulldogs won at least nine games every season and capped three of those campaigns with bowl victories.

The 2001 season, with future No. 1 overall NFL draft pick David Carr at quarterback, saw the Bulldogs rise high in the polls – as high as #8 in the country, Fresno State’s highest ranking ever - and capture the nation’s imagination as they reeled off victories over Colorado, Oregon State and Wisconsin in an 11-3 campaign.

With Hill’s eye for talent and his pro-style offense showcasing players for scouts, Fresno State became a pipeline to the NFL. His tutelage produced first-round NFL draft picks Carr, Logan Mankins and Ryan Mathews, along with a bevy of other NFL veterans.

Hill emphasized recruiting players from the San Joaquin Valley. He also came up with the "Green V" (signifying the Valley’s agricultural richness) that adorned Bulldog helmets and enabled Fresno State to raise millions of dollars for football, other sports and education.

Hill served as recruiting coordinator and offensive line coach under Jim Sweeney at Fresno State, but knew he needed experience elsewhere if he were to return as Sweeney’s successor. He became offensive coordinator at the University of Arizona and spent five seasons as an NFL assistant before returning to Fresno State as head coach.

Hill is a part of the Bill Belichick "coaching tree," having spent four seasons on his staff with the Cleveland Browns. In addition, Belichick long relied on Hill’s evaluations of players and coaches in building his New England Patriots dynasty.

Hill’s blue-collar, bring-your-lunch-pail approach made him an All-America center at UC Riverside and transformed Fresno State into a program admired by the Red Wave and fans across the nation.

After returning to the NFL for a stint on the Atlanta Falcons’ staff, Hill segued into broadcasting. He has done national broadcasts for ESPN, as well as delivering analysis on 940 ESPN’s Bulldog broadcasts since 2015.

"Pat, his wife of 41 years, Cathy and their three sons: Mike and his wife Aubrey, Matt and his wife Liz, and Zak and his wife Megan along with all the Hill’s beautiful grandchildren continue to reside here in the "Valley".