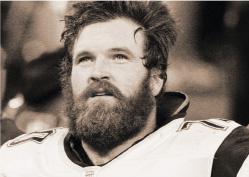 The 6-foot-4, 308-pound offensive lineman utilized intelligence, strength and toughness to become one of the most dominant offensive linemen in National Football League history after a standout career at Fresno State.

Over 11 NFL seasons, nine with the New England Patriots, Mankins made seven Pro Bowls and was named first- or second-team All-Pro six times. He earned selection to both the Patriots 50th Anniversary Team and the Patriots All-2000s Team. In 2010, the Patriots line that he anchored earned the Madden Most Valuable Protectors Award given annually to the NFL’s best offensive line.

Illustrating his toughness, Mankins is believed to be the only player in NFL history to have played with a torn anterior cruciate ligament in his knee, which he did for most of the 2011 season. In the Super Bowl ending that season, he played with a torn MCL in his other knee.

Mankins made 161 NFL starts and started in all 17 of the Patriots' postseason games from 2005-13. He scored a touchdown on a fumble recovery in the 2006 AFC Championship against the Indianapolis Colts.

The combination of Mankins, at left guard or left tackle protecting quarterback Tom Brady, was a winning one for the Patriots. They made the playoffs eight times during Mankins’ tenure, twice reaching the Super Bowl. "Nobody stood for Patriots football more than him." — New England QB Tom Brady said about Mankins. "He is one of the all-time great Patriots and the best guard I ever coached." — New England Coach Bill Belichick about Mankins.

The last two seasons of his NFL career were with Tampa Bay, where he was the Buccaneers’ top offensive lineman and a mentor to the team’s young players.

Because he weighed only 240 pounds, he was lightly recruited out of Mariposa High School, but Fresno State assistant coach Tim Simons liked what he saw and recommended him to Coach Pat Hill.

Mankins spent his redshirt year in the weight room and packed on 50 pounds of muscle. After three days of practice the following season, he was named the Bulldogs’ starting left tackle — the "protector" of quarterback David Carr, a future NFL No. 1 overall draft pick.

He later became the first offensive lineman in Fresno State history to win the team's MVP award and was selected by New England in the first round of the 2005 NFL draft.