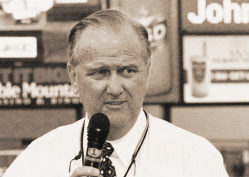 John Carbray, a visionary who was ahead of his time in many ways, was the prime driver in building Fresno’s state-of-the-art downtown stadium and bringing Triple-A baseball to Fresno.

Launching the Fresno Grizzlies was a 12-year effort that required Carbray to round up investors, acquire a team, play four seasons at Fresno State’s Beiden Field and convince City Hall to fund the $46 million stadium.

On May 1, 2002, the stadium debuted to an overflow crowd of 12,792 and provided the foundation for future renewal in the city’s long-neglected downtown.

That year the stadium, which Carbray had a hand in designing, was named the best new facility in Minor League Baseball, and Carbray was named Pacific Coast League Executive of the Year.

Before that, Carbray had already established himself as a creative sports and entertainment promoter.

In 1989, he founded Projects West, which brought major acts such as Reba McEntire, the Beach Boys, and Crosby Stills & Nash to Major League stadiums to perform after games. The concept helped many teams gain new fans.

Carbray helped introduce soccer as a professional sport in the United States and laid the groundwork for the U.S. to host the 1994 World Cup. As general manager of the San Jose Earthquakes, he landed stars such as George Best and created a festive atmosphere that enabled the franchise to set attendance records.

In 1969, at the age of 31, he became the youngest president of a Minor League when he was chosen to lead the Northwest League.

Then, along with actor Bing Russell, he turned the Portland Mavericks, an independent team, into one of the biggest stories in baseball. The short-season Mavericks attracted many more fans than Portland’s Triple-A team had in twice as many games.

When Sacramento rejoined the PCL after a 13-year absence, Carbray ran the operation. Playing in old Hughes Stadium, which had a short left-field fence, the team bashed home runs and played some games in shorts. The result: The Solons led Minor League Baseball in attendance in back-to-back years.

Wherever he went, John and his wife, Diane, gave back to the community. In Fresno, this meant supporting the Boys & Girls Clubs and putting his promotional heart and soul into the annual City-County All-Star Football Game.