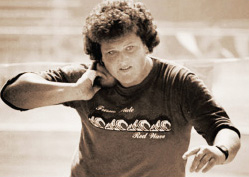 Dorothy-Marie "Dot" Jones set records in the shot put at Modesto College and Fresno State before becoming the most dominant women’s arm wrestler in the sport’s history with 15 world championships.

She then parlayed her personality, strength and sense of humor into a highly successful career as an actress highlighted by three Primetime Emmy Award nominations (2011-13) for her portrayal of "Coach Beiste" in the musical television series "Glee."

Jones was born in Turlock, California, and raised in Hilmar. Between eighth and ninth grade, she grew more than 5 inches and started weight training to strengthen her gangly frame. At Hilmar High School, she starred in track and field and, at 6-foot-4, attracted a basketball scholarship offer from Nebraska.

But she loved the shot put and instead went to nearby Modesto Junior College, where she set the national JC record at 51 feet, 1.5 inches and earned All-America honors.

The records and All-America recognition continued at Fresno State. She set the university’s record at 54 feet, 2.75 inches — a mark that still stands — in 1986 and the indoor record as well (53-7.5). She placed fifth in the NCAA indoor Championships in 1985 and fourth at the NCAA Championships the following spring. While at Fresno State, she won three conference titles and was a three-time All-American.

A few years before, at age 19, Jones had won the first of her 15 world arm wrestling championships. World Champion, Lori Cole said, "There is no word for it. She beat me in her first tournament when she was 19 and I couldn’t believe it. At the time I had already won a couple of titles and I was experienced." Jones was capable of bench-pressing more than 300 pounds and already battle tested because of her track-and-field career, Jones simply was too much for the competition, often winning matches in mere seconds.

After college, Jones was a youth counselor at the Fresno County Juvenile Probation Center and acting wasn’t on her radar. But she was asked to audition for a role in the syndicated series "Knights and Warriors." From there it was on to roles in feature films, a recurring guest role in the TV hit "Married … with Children" and other guest appearances before hitting it big with "Glee."