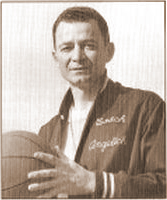 In his second year at Kerman High School, Lee Angelich did everything but blow up the footballs. He coached football, basketball, baseball, track, and also drove the bus. Angelich later focused on basketball, coaching the sport for sixteen years at Kerman, Fresno, and Porterville High Schools. Angelich's sixteen-year basketball record was 255-95 and his teams won eight league titles. His 1949 Kerman team won the Small Schools Central Section Championship, but his eight years at Fresno High were the most impressive. The Warriors went 134-311 under Angelich and he was chosen Coach of the Year five times. During one stretch, Fresno High had fifty-four consecutive wins at home. Twice, they finished ranked number two in northern California. In 1963, his final year of coaching, the Warriors were 22-3, but they lost twice to cross-town rival Roosevelt High School and failed to win the championship.

Angelich was a high school star athlete, beginning at Narbonne High Schoolin Lomita in southern California. In his junior year, the family moved to Redwood City, where Angelich was an All-Conference end in football and a versatile, high scorer in track at Shasta High School. He helped Sacramento Junior College to a national title in 1941 placing second in the high hurdles and fifth in the high jump. Sacramento JC also won two state titles. Angelich joined world-record sprinter Harold Davis and quarter-miler Grover Klemmer, along with Jim Jurkovich from Fresno High - a sprinter, discus thrower, and long jumper at University of California, Berkeley. Klemmer and Jurkovich were in the service by the end of 1943, but even with a small squad, Cal finished second to University of Southern California, a team the Bears had defeated in a dual meet. Angelich went undefeated in the 120 highs his senior year.

While in the Navy, Angelich narrowly escaped a Japanese kamikaze plane attack while stationed aboard the U.S.S. Rixey, a troop landing and hospital ship. He was discharged as a lieutenant in January 1946 and took advantage of the fifth year of competition allowed veterans. He enrolled at Fresno State University to complete his Bachelor of Science degree and excelled at the 120 highs. He placed third in the West Coast Relays.

His coaching expertise also took him overseas in 1961, when he was selected for a three-month stay in Libya to form a Libyan national basketball team for the North African Games in Tunis, Tunisia. "It was a long time, but the competitive spirit and the Libyans' hunger to learn made it a very satisfying experience," Angelich said. "We competed against teams from Russia, Germany, France, Czechoslovakia, and the United States, who were from Wheelus Air Base in Greece." After the tournament, he conducted basketball clinics in Yugoslavia, the birthplace of his parents and his in-laws. Angelich retired from education after thirty-four years in 1980. In l1992, he was inducted into the Fresno City/County Basketball Hall of Fame. His final sports assignment was as an area baseball scout for the Montreal Expos.