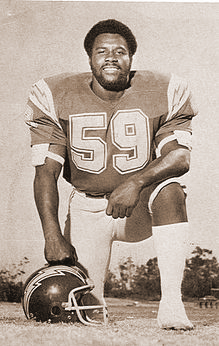 Charles Anthony stood six feet tall and tipped the scales at 217 pounds when he was a senior at Edison High School in 1969. Charles Anthony was a Tiger coming at you at mach speed from the linebacker position. Winning championships for head coach, Jim Fugman, and playing alongside the likes of the great Charle Young at Edison, led to many opportunities for Anthony. Along the way, he won All-League and All-Valley, and All-Northern California honors and plenty others including being named the Lineman of the Year by the Fresno Bee during his senior year and named to the Sun-Kist Prep All-American team in 1969. Charles had plenty of offers to play football anywhere he wanted following his graduation from Edison in 1970 and he chose a good one: the University of Southern California.

John McKay was indeed happy to have Charles aboard with the Trojans. So much so, he assigned him the #55 to wear on his uniform. It was a privilege to wear that number and you had the respect of teammates and coaches when you did (notably worn by Willie MeGinest and Junior Seau). He did not let down his teammates or coaches.

With his teammate from Edison, Charle Young, Anthony played for the Trojans from 1971 to 1973. He was a three-year starter for the Trojans, making the All-PAC 8 team in 1972 and 1973. He played in two Rose Bowl games and had a great college career, but the biggest thrill might be that he was a starter with the 1972 Trojans, a team that won the National Championship and is also the team that many people call the best USC team in history. During that year, Charles also won the MVP award for the drubbing the Trojans gave to Notre Dame, 45-23, at the L.A. Coliseum. Then, the Trojans went on to beat Ohio State in the Rose Bowl to claim that National Championship.

The San Diego Chargers drafted Anthony in 1973. Injuries took their toll on the rookie linebacker and he left the Chargers after one year and then played in the CFL for a couple of years with the BC Lions and the Ottawa Roughriders, but the injuries cut short his pro career. Charles is still remembered as one of Fresno County's best football players.