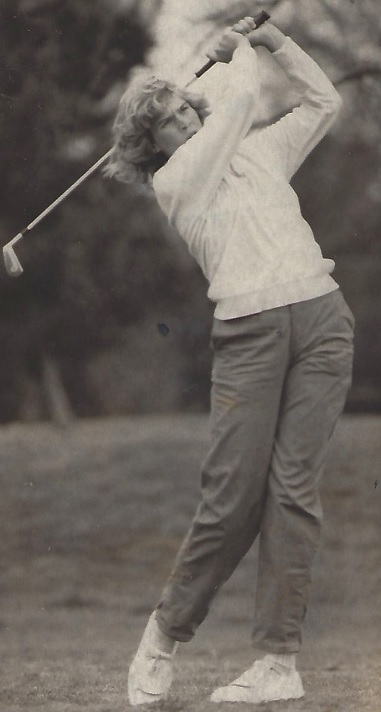 In the early 1980s, the best place to find Kathleen McCarthy was at San Joaquin Country Club. She was there almost every day, especially in the summers when she estimates that she spent between six and ten hours each day on the course.

Believe it or not, Kathleen McCarthy did not actually pick up a golf club for the first time until she was 12 years old. She credits both her father and her brother for her introduction to the sport, but she was far from a natural. However, she took lessons from the head golf professional at San Joaquin CC. In three years, her handicap went from 34 to zero! McCarthy was the Northern California Golf Association's most improved junior player in each of those three years, and she has the distinction of being the first golfer to record back-to-back eagles in a USGA event. (It took place in Greeley, Colorado, and her Titleist golf ball was sent to the USGA Golf Museum.)

Kathleen McCarthy attended San Joaquin Memorial High School. At that time, Memorial did not have a girls' golf team so she played with the boys. Though she was not on varsity her freshman year, by her junior year she was regularly playing in the Panthers' No. 1 position.

She made it her mission after her sophomore year of high school to earn a college scholarship, and Kathleen McCarthy did just that. TCU won the national championship in 1983, the year McCarthy graduated from Memorial. She could have gone there. She could have also gone to Arizona State, Florida State, SMU, Texas A&M, Tulsa, UCLA or USC.

"I didn't consider myself a strong student," said McCarthy. "I loved that many interesting people who are driven and successfully graduated from Stanford. I was inspired and liked the challenge."

Her education came on the golf course, where she was a three-time first-team all-American for the Cardinal just like fellow Fresnan Shelley Hamlin. McCarthy won eleven tournaments for the Cardinal between 1983 and 1987, and she also won the 1985 and 1987 Women's Western Amateur. In 1986, she finished runner-up in the U.S. Women's Amateur.

Golf has taken Kathleen McCarthy all over the country and the world. She played in four U.S. Opens, two British Opens, two Curtis Cups, and one World Cup tournament (in Venezuela).

In her hometown, she still holds the course record for women at San Joaquin Country Club (67).