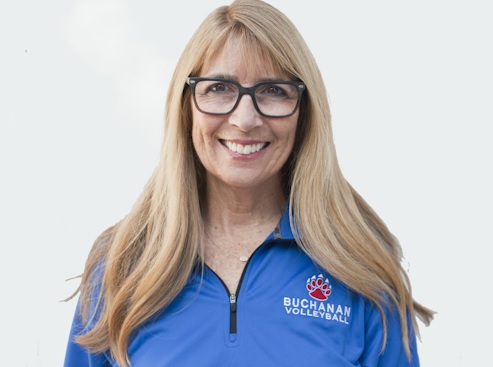 Marian Battles was 23 years old when she accepted a job at Kerman High School in 1978 to be both an English teacher and a coach. And not the volleyball coach, but rather an assistant swim coach and the junior varsity basketball coach. "They needed coaches," said Battles, who added, "it was the best place for me to really start." Marian Battles had been a student teacher in Fresno Unified, as well as a long-term substitute teacher at Hamilton Elementary School. She has a degree from Fresno State, graduating in 1976 after first attending San Joaquin Delta College in her hometown of Stockton. During her second year at Kerman is when Battles took over as the Lions' volleyball coach. She also coached the boys' and girls' tennis teams. In fact, during her 35-year career as a volleyball coach, Marian Battles spent 14 years as a tennis coach. Her tennis teams ended up winning 16 league titles. On the volleyball court, though, is where Marian Battles had the most success. She played the sport in high school (along with playing basketball and tennis), and, in her words, she "loved building programs." Battles spent seven years at Kerman before moving on to Yosemite High School, where she led the Badgers to six league titles in nine years, along with two section titles. In 1994, she became the girls volleyball coach at Buchanan. Three years later, she led the Bears to both a league title and a section title, the latter of which was the first one in school history. That Buchanan team went undefeated in league play (10-0), and was 12-1 at home. Battles would coach the Bears for a total of 19 years, winning 12 league titles and seven section titles. She retired in 2012 as the second-winningest coach in Central Section history, with an overall record of 838-209. In retirement, Marian Battles continued to coach. She spent two years at Alta Sierra Intermediate School, from 2013-2015, and she also stayed active with the Central Cal Volleyball Club until 2019.