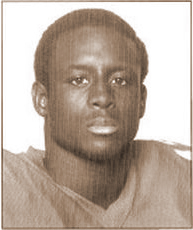 The two most skilled positions on any football team are unquestionably quarterback and wide receiver. The passer must be able to guide the ball accurately to his target like threading a needle. The receiver must become a contortionist, leaping and diving, necessary, to collect the ball. The two players greatly depend upon the skills of the other Fresno State has produced at least a dozen exceptional wide receivers throughout its history of exciting football; a legendary Iist including Henry Ellard, Bernard Berrian, Charlie Jones, and Stephone Paige.

Stephen Baker, known as "The Touchdown Maker, survived the mean streets of central Los Angeles by playing football for Hamilton High School and West Los Angeles Community College, but it wasn't until he was a junior at Fresno State that he came into his own as a dynamic wide receiver and future National Football League star for the New York Giants. Fresno State posted the nation's only undefeated college record during the 1985 season, ending its schedule with an upset win over undefeated Bowling Green, a 51-7 victory in the California Bowl.

The Kevin Sweeney-Stephen Baker connection helped lead the way for the Bulldogs and both would go on to play in the NFL. In his two seasons at Fresno State, Baker had sixty-two catches (averaging 26.3 yards per catch) and sixteen touchdowns with the NCAA record-setting Sweeney. He also caught a thirty-six-yard touchdown pass in the Japan Bowl to give the West a victory in that All-Star game. Professional scouts had seen enough and Stephen Baker was chosen in the third round of the NFL draft, the 83rd overall selection.

How challenging was it for Baker to become a starting professional football wide receiver? First, Baker was not tailor-made physically for his position; he was small at 5'8" and 160 pounds. He had to prove himself superior to taller (6'2" to 6'6") and heavier (185 to 230 pound) rivals for his position. But he had other "tools" that are required to excel as a dependable catcher: speed, quickness, great hands, mobility, and toughness. Baker honed his toughness to endure six seasons of professional football with the Giants from 1987 to 1992. He was rewarded with a cherished ring as a member of the winning XXV Super Bowl team against the Buffalo Bills, 20-19. He caught two passes in the game, one of them a fourteen-yard touchdown toss from Jeff Hostetler in the second quarter.

Baker's best season statistically was in 1988 when he snagged forty passes for 656 yards and seven touchdowns, one of them a memorable eighty-five yard catch. He also caught thirty passes for 525 yards in 1991 and achieved his best yards-per-catch average in 1990 when his twenty-six receptions totaled 541 yards for an average of 20.8. Stephen Baker's career totals in ninety NFL games were 141 receptions for 2,587 yards and twenty-one touchdowns. “The Touchdown Maker" is a school teacher at the James J. Flynn Elementary School in Perth Amboy, New Jersey. He coaches football and track and is a tireless representative for the Giants, ViSiting schools, camps, and special events dealing with youngsters in the New York/ New Jersey area. He also leads workshops and mentorship programs to help troubled and disadvantaged kids. In 2009. the New York Giants named Baker the Giants Alumni Man of the Year. Stephen and his wife, Althea, a school administrator. live in Perth Amboy with their children, Ashley and Stephen Baker and Joshua and JaMon Dunn.