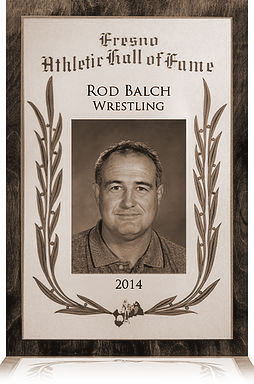 This combination of excellence made him one of the most-decorated individuals in the sport from the Fresno area and culminated in his induction into the California Wrestling Hall of Fame in 2014.

In addition, his son Andrew won the 145-lb. pound crown at the CIF State Championship in 2008, enabling the Balch's to become just the third father-and-son combination to claim gold medals in the event's history. Competing at 135 pounds, Rod claimed his state title in 1974 while wrestling for Clovis High.

A move to CSU Bakersfield the following season proved fruitful for Balch. During his three seasons with Coach Joe Seay's Roadrunners, he totaled 96 victories, including 21 by pins, captured three conference titles and was a two-time Division II All-American, finishing second and fifth in the NCAA Division II Championships. While Balch was competing for the Roadrunners, they won national titles in 1976 and '77 and were the runners-up in '78.

Balch then graduated from competing on the mat to coaching at his alma mater, Clovis High. Over 15 seasons with the Cougars, his teams won 8 North Yosemite League Championships, 7 Central Section Championships and 3 CIF State Championships, and he was named California State Coach of the Year.